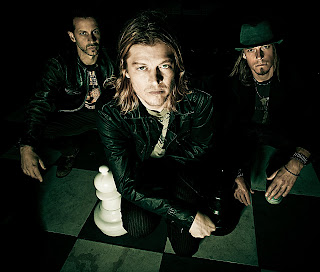 Platinum recording artist Puddle of Mudd released their first record in 2001, Come Clean, which went on to sale more than more 3 million copies. The group would give us rock hits like “Control,” “Blurry,” “She Hates Me,” “Famous” and “Psycho,” just to name a few.

Now the band has taken on an entirely different project. On Aug. 30, Puddle of Mudd will release an album titled re:(disc)overed. The record is an 11-track disc featuring covers of tunes made popular by the likes of The Rolling Stones, Elton John, Neil Young, AC/DC and the Steve Miller Band.

It’s not your average, run of the mill cover album. It had better not be because doing covers can be a career killer. Not this time, though. The band focused on music that inspired them and hooked up with a great producer and added piano players and backup singers to keep the vibe of the originals but then added the Puddle of Mudd touch.

The band is one of seven that is appearing on the Rock Allegiance Tour, which plays the Cynthia Mitchell Woodlands Pavilion on Sunday, Aug. 28, at 5 p.m. Also performing are Papa Roach, Buckcherry, Crossfade, Red, P.O.D. and Drive A.

88MW spoke with guitarist Paul Phillips about the band’s new project and being a momma’s boy.

How did this project come about?

We took about five or six months off after being on the Carnival of Madness, and that’s something we haven’t done since we started. So then, we started getting offers from summer tours, then Europe came calling and we aren’t the type of band to go out and play and just beat a dead horse. We want something new out there to draw traffic. Anyhow, we have been playing “T.N.T.” and “The Joker” and one thing led to another and the whole idea about a covers record came into play. We brought in piano players, back up singers and we wanted to bring those people out on tour with us, as well. It’s something different and off the wall and gives our fans an experience they have never had.

Who came up with the song choices?

It took probably three months bouncing ideas with Wes, our producer and manager. We kind of honed in on that ’60s and ’70s era. There are a few different eras of music that I like, but that time was the era we liked and were inspired the most by. We ended up with about 30 songs, then got it down to 14 and recorded those. After that, we chose 11 and that’s what will be coming out.

Do you have a personal favorite on the album?

There are a few for different reasons, but the one that was most challenging was Elton John’s “Rocket Man.” Just for the simple fact the song is piano driven, and that’s something this band doesn’t do at all. At first I didn’t know how we were going to pull it off. We are these grungy power-chord guys, but it was fun and exciting to get into the song and take a whole other approach and pull it off. Thankfully the producer on the album was Bill Appleberry, who is a piano player and played with the likes of Joe Walsh, James Gang and The Wallflowers.

Did you guys play Devil's Advocate & think about the dangers of releasing a covers record?
Hell yeah. But we made a conscious decision not to choose cheesy ’80s New Wave songs that didn’t mean anything to us. We didn’t want to take the easy way out. We wanted to do timeless classics that we love from bands that we love. Also what comes with that is the fact you set yourself up for crucifixion because those songs are classic untouchables. The goal going into this was to record this record on our gear with modern sound but do everything we can to keep those songs intact, like representing every guitar and drum part. You don’t want to mess too much with them because then you’re asking for it. We recorded live with the drummer and the guitar was done on one or two takes, with the rhythm being just two guitars as opposed to being just five or six guitars. We wanted to keep it to that old school vibe. This record opened our eyes and ears, and I’m really excited to see what happens in the future.

You picked up the guitar early on in life, so was it a natural fit once you started playing?

Yeah it was. My father always played music. He was in bands and played gigs in order to pay for college. The songs we did on this new record are songs I grew up listening to with my dad. When I finally got MTV, I naturally gravitated to the guitar. I started taking lessons when I was 11 but it was learning stuff like “Mary Had a Little Lamb” and “Jingle Bells,” but I was like that’s not Mötley Crüe and Van Halen. My teacher told me I had to learn that before I learned the other, and I figured out that was not entirely true. I actually put the guitar down for a few years then a friend of my showed me some power chords and I sat in my room and learned “Master of Puppets” front-to-back one summer and taught myself from there on out.

What's the best piece of advice someone has given you?

My mom always gives me the best advice about everything. She always has words of wisdom for me. I am really close to her and if things aren’t going well, I tend to call her for encouragement and advice.