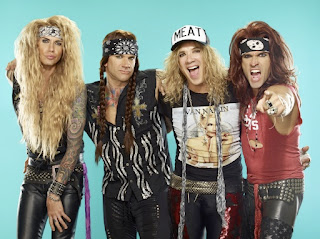 Spawned in Los Angeles, this four-piece may have began playing parody covers but have since grown into a band of their own and are now touring in support of their second national release on Universal Records, Balls Out, which ‘dropped’ in late October.

The sophomore record is a follow-up to Feel the Steel that featured the popular tunes “Death to All But Metal,” “Asian Hooker” and “Community Property.”

Like the debut, Balls Out doesn’t disappoint. Songs like “17 Girls in a Row,” “If You Really, Really Love Me,” “It Won’t Suck Itself” and “Just Like Tiger Woods” proves this band is for keeps.

From weekly shows on the Sunset Strip to headlining arenas in Great Britain, Australia and Germany, Steel Panther is taking over.

I caught up with lead vocalist Michael Starr, who spoke about not having herpes, playing on the moon and doing 25 girls in a row.

I’ve seen you guys several times but I will never forget the show in January at House of Blues in Vegas where a girl’s top got ripped off, which started a fight on stage.

Oh wow! You were there for that? My friend Tommy had to take that feisty chick off stage. She pulled the other girl’s top down and then a chick with no shirt tackled her on stage. So Awesome.

You have a personal favorite song on the new album?

Leaning towards ‘Tomorrow Night.’ It reminds me of super early Scorpions meets Van Halen, sort of like ‘Panama.’

Yeah, Facebook makes it hard for you to cheat on your old lady. That’s why Twitter is so much popular. It’s more private and you can lock down people. Myspace was the worst. I honestly think that’s why it’s gone. It’s true shit.

When you started, did you imagine Steel Panther would go mainstream?

No, I truly didn’t. I wanted it to happen, but I just didn’t see it coming. I think that is what attracts people to Steel Panther. It’s not fake. It’s cool to see what kind of vehicle to build and then what kind of race to enter. I did read where the album charted. Dude, I’m having a hard time breathing. I read this while I was sitting there taking a shit. I thought, I am on the toilet and people all over the world are listening to our music right now. It’s pretty weird.

How does it feel to know the album is really doing well?

Man, I got to be honest with you. My chest is all tight. I’m not sleeping very well because I am so excited to tour and support this record. When our first record came out, we didn’t have any expectations. Now we have the follow up (Balls Out) to Feel the Steel. I personally feel pressure to be the best I can really be.

How do mainstream rock fans & bands react when they hear or see Steel Panther?

Throughout the years, we have had multiple guests come on stage and rock it out with us. Cee-Lo, Kelly Clarkson, Linkin Park, GNR, everyone just enjoys it. I’m extremely surprised people dig it.

It’s funny you say that because we write all these songs together. I am singing them, so it’s first person. Satchel is the one who fucked 17 and couldn’t make it to 18. I personally did 25, but unfortunately 25 doesn’t work well in the song. Either 17 or 25, you have to lower your bar some to get to that number. No, you aren’t going to fuck 17 prom queens, it’s not happening. You got to fuck a couple of fat chicks and maybe even a retarded chick.

So what you are saying is — Steel Panther doesn’t discriminate.

Fat chicks and ugly girls are the best to hang out with. Hot chicks are annoying and the only thing they are good for is a picture. If you get a homely chick and bend her over, she looks the same as a hot chick who is bent over.

I heard a rumor that you are the only band member who doesn’t have herpes.

I don’t know where you heard that but it’s totally true. The other three guys have it and you know what? I am bummed. I feel left out.

I also heard that you have a keen sense of smell.

When I was younger, my mom always knew when I pooped in my pants. I developed her keen since of smell. She used to call me ‘stinkpot’ because I had a problem with that. I can smell cocaine, seriously, I can. I can smell an 8-ball of cocaine and tell you how bad it’s cut. Goes with girls too. Girls with really bad hygiene, I have a really hard time fucking them. If I have to do it, I will.

When did your poop problems end?

Maybe when I was 10. In my 30s, I had trouble with sharting. Do you know what that is? That’s when you fart and you don’t realize you have diarrhea. Shitting and farting together.

What would be an ultimate tour?

So what’s left for Steel Panther?

I try to read all the comments everyone posts about us and so forth and one thing about Steel Panther, you either love us or hate us. West Coast, Las Vegas, United Kingdow, we got it going on. With this new record, we are selling out shows in Cleveland, Chicago, Boston, New York and Australia. The natural progression for Steel Panther, in my eyes, is to be a full-blown arena band touring the world. And to be the first band to play on the moon. I’d leave a petri dish with herps up there as a memento.