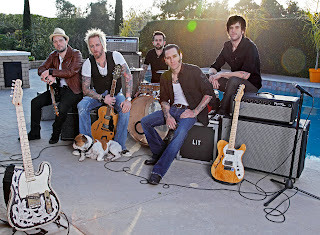 West Coast rockers Lit returns and they seem to be better than ever. The band that brought our ears the giant hits “My Own Worst Enemy” and “Miserable” are in the midst of releasing a new material for the first time in more than seven years.

Lit signed with RCA Records in 1999 and along came their first national release A Place in the Sun that reached platinum status and gave the music world a breath of fresh air. The first single, “My Own Worst Enemy,” remained atop of the Billboard modern rock chart for more than three months and earned the Billboard Music Award for best modern rock song of 1999.

The group followed that singled with the Top 10 hits “Zip-lock” and “Miserable.” The video for “Miserable” gained worldwide attention because it featured the blonde bombshell Pamela Anderson.

With super success on Lit’s shoulders, the band earned a rightful spot on tours like the Vans Warped Tour, Woodstock 1999 and shows with Kid Rock, Garbage, The Offspring and No Doubt.

Their second album on RCA came in 2001 with Atomic. “Over My Head” and “Addicted” charted and “Lipstick and Bruises” led the way giving the band their fourth Top 10 single.

Lit parted ways with RCA in 2002 and released a self-titled album in 2004 on the DRT Entertainment label, which also featured bands such as Powerman 5000, Clutch and Seven Mary Three.

Also during this time, guitarist Jeremy Popoff opened a restaurant in Fullerton called the Slidebar Rock-N-Roll Kitchen that has gone on to become highly successful.

The band had to deal with tragedy in 2008 when drummer Allen Shellenberger was diagnosed with having a brain tumor. A year later, Shellenberger lost the battle at the age of 39.

The guys took time to heal and decided to continue to play music and found drummer Nathan Walker and just last year added a fifth member.

After seven years, Lit has announced plans for new music and a new tour. One of those shows will be May 19 with Fuel as a part of the weekly Thursday night Party by the Pool’s Liquid Society at L’Auberge du Lac in Lake Charles. Tickets are $10 and can be purchased at the casino or online at Ticketmaster.com. The show is restricted to those aged 21 years and up.

Between interviewing applicants at his restaurant, Popoff spoke with 88MW about new music, his business venture and his love for poker.

We have gone through some stuff. Very personal tragedies and what not and it has sort of kept the band sidelined. We never really stopped playing, we just stopped recording and didn’t tour extensively because we were spread thin. Musically we have been writing the entire time for other artists. I personally spent some time in Nashville writing some country music. I also opened a bar/restaurant in Orange County (California). Everyone needed a re-charge and we are back with a bunch of new songs, a new record in the works and a new management company.

Tell me about the new music. I hear you guys are working with producer Marti Fredericksen, who has Aerosmith, Def Leppard and Mötley Crüe on his resume.

We worked with a few different people and added a fifth guy to the band, Ryan Gilmore. He is playing guitar, keyboard and singing some backup vocals. Plus he’s a great songwriter. It’s nice for me because being a guitar player for all these years, I now get to do some stuff in songs that I haven’t been able to do before. Sonically, the new stuff is a little bit more dynamic. We have played a few shows and performed the news songs and the crowds have loved it.

Does it seem like less pressure to record an album this time around?

We really don’t have anyone to answer to but ourselves, which is kind of scary. The band has always tried to stay true to what we were about. We never tried to re-invent the wheel. The old fans are going to be stoked and I think we are going to win over the new ones.

Do you think the down time will hurt?

Yes and no. Hardcore Lit fans can’t wait for some new rock-and-roll. I know I am excited. I’m not a super huge fan of any of the ‘modern rock’ music out there right now. I think people are looking back in the their collection and finding songs that actually made an impact in their life. All we can do is make good songs and put on good shows. We have a great management company now and they manage bands like Maroon 5, Stone Temple Pilots and 3 Doors Down so we are in good hands now and can sit back and focus on making really good music. We a have a new website that will launch soon. We re-recorded ‘My Own Worst Enemy’ and ‘Miserable’ and we are going to give away ‘My Own Worst Enemy’ on the new site just for coming to check the site out and we’re going to put ‘Miserable’ up on iTunes.

We are also going to have all kinds of cool stuff on there including demos of new music. The address is going to be Litband.com. Fans are going to love it because we are going to get them heavily involved. We are planning to do online contests where we fly out some fans, have dinner with them and listen to some new music. We may even have a contest to where they fly out and help us produce a song or two.

Tell me a little bit about your 2006 venture, the Slidebar Rock-N-Roll Kitchen.

We live in Fullerton, which is just north of Anaheim. We spent most of our lives here and I thought it would be a cool place to have a bar or restaurant. Plus it would be a good place to hang out when we are not on the road. If nothing else, a place I wouldn’t get kicked out and get free drinks. It’s been open for five years now. We are known for killer food and we get a lot of celebrities that come in here. We have great shows too and this place has become a legitimate music venue in Orange County. There’s never a cover charge. It turned into a big operation.

I hear you are a poker player.

My brother (A. Jay Popoff, lead singer) and I grew up going to my grandfather’s house. He lived in Arizona in Bullhead City, which was right across the river from Laughlin, Nevada. It was like a mini-Vegas on the river. My brother and I were always fascinated with the casinos and once we were old enough to go to Vegas, we would go all the time. The record we put out, ‘A Place in the Sun,’ had a lot of Vegas influences, as did our stage show for that tour. Before that album, I would play poker two or three nights a week to make extra money to pay for groceries and stuff. I would hustle the local games.

Ever play in the World Series of Poker?

No, but I have been watching it every year on television. My problem is I like to drink when I gamble and I can’t sit in any place for too long. As much as I love poker, I also love the thrill of gambling and going all-in. I am not a very disciplined player.

Yeah, I get a little excited with those. There is a game in town here in Fullerton that some of my bartenders go play in and I’ll play some. It goes into the wee-hours of the morning. Just recently, I was watching that game and there playing was some friends of mine from the band A Thousand Horses. The lead singer Mike hit a royal flush. If I had not been there, I wouldn’t have believed it. The funny thing was, the game was being played by a bunch of broke musicians and in the pot was $12. I said ‘dude, you just blew your poker wad.’ All over some cheap bear, pizza and a $12 pot.