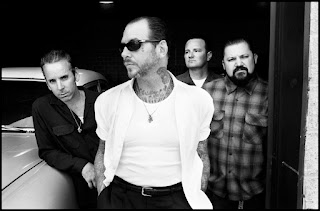 It’s been seven long years since punk legends Social Distortion have put out a new record, and according to sales and popularity, the SoCal veterans remain strong as ever.The new album Hard Times and Nursery Rhymes on Epitaph Records was released in January and debuted at No. 4 on the Billboard charts, which gave the group their first-ever Top 10 album.

Social Distortion was one of 14 bands to play BuzzFest 26 at the Cynthia Mitchell Woodlands Pavilion on May 1.

The band formed in 1978 in Fullerton, Calif., and lead singer Mike Ness is the only original member. They released Mommy’s Little Monster in 1983, which created a music buzz around the country largely in part because of the single “Another State of Mind.”

After hiatus and some personal issues, the band regrouped to release Prison Bound in 1988. Popularity began to soar and Epic Records signed the band giving Social D their first major deal. A self-titled album came in 1990, which featured the Johnny Cash cover “Ring of Fire.”

Then came Somewhere Between Heaven and Hell and White Light, White Heat, White Trash before tragedy struck on February 29, 2000, when guitarist Dennis Danell suddenly died due to a brain aneurysm.

The band took some time off and several changes were made within the band, before the release of Sex, Love and Rock ‘n’ Roll in 2004.

Popular songs include “Let It Be Me,” “Ball and Chain,” “Story of My Life,” “Bad Luck,” “Cold Feelings,” “I Was Wrong,” which was their highest charting single at No. 4 and their latest, “Machine Gun Blues.”

Ness, 49, has dealt with his own demons. Quoted in a previous interview about Charlie Sheen and Lindsay Lohan, Ness responded “they have no idea what’s waiting for them around the corner, no idea.”

He has since recovered and enjoys a great family life with his wife and two sons. Aside from his music, he helped develop Black Kat Kustoms in 2003. Located in Santa Ana, the store specializes in custom car, hot rod, and chopper clothing as well as custom parts.

88MW spoke with Ness about his illustrious career.

Are you surprised the band has lasted nearly 35 years?

I had hoped so, but I sure didn’t think so. Dude, we really weren’t supposed to live this long. In the back of my mind, this is always what I wanted to do as a small kid and I wanted to take this as far as I honestly could.

Social D has influenced many bands and musicians. Who were some of your influences?

Man, there has probably been hundreds like Eric Clapton and The Ramones. I remember listening to a band in the early 80s called Jason and the Scorchers and saying ‘man I want Social D to sound like this.’ The actual list for me is pretty wide because I draw from different styles of music. I love Big Band music, folk, blues, grunge rock, country music.

It’s been years since you released a new record.

What’s funny is the record only took about four or five months to make but it took us about five years to get into the studio. Some of these songs are like five and six years old. We are a really big touring act so we tour a bunch. You can’t make a record until you stop touring, but I want to try to close that gap before we make another record.

I loved the concept of making a short film instead of a regular music video for the single ‘Machine Gun Blues.’

I always thought music videos should be more literal to the lyrics. Rather than just doing a music video, I thought it would be very cool to do a short film for the song. I ran with the same storyline as the song. The main character gets into a little trouble then becomes remorseful, hence the title ‘Machine Gun Blues.’ Getting to act is a lot more fun than just posing with your guitar.

You still have any new music left in you?