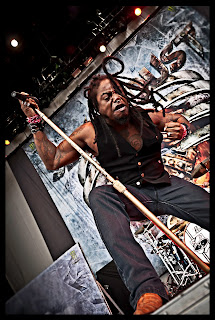 If you’ve never heard nor seen Sevendust, then you don’t know rock music. The five-piece band from Atlanta has been throwing down since their self-titled first release in 1997.

While bands struggle to continue to keep their heads above water, it’s the polar opposite with this band. It may be cliché to compare Sevendust to an aged fine wine, but it seems this band continues to get stronger and gain more popularity with age (if they weren’t good and popular already).

Often called road warriors due to the hectic touring schedule, Sevendust has recorded eight albums and are on the road again entertaining their family of fans with a plethora of hits that include “Black,” “Denial,” “Praise,” “Angel’s Son,” “Enemy,” “Broken Down,” “Driven,” “Prodigal Son,” “Unraveling,” “Forever” and “Last Breather.” The last three are respectively hits from last year’s release on Atlantic Records, Cold Day Memory.

There is not much out there about Sevendust that hasn’t already been said. Fresh off a tour in Australia, lead vocalist Lajon Witherspoon spoke with us about his fondness of music, some history on the band and his take on the future of one of the hardest working bands in the business.

Born in Nashville, Witherspoon, 39, had music as an influence dating back as a kid. And who thought that the youngster would go on to be named in the Top 100 Metal Vocalists of All Time by Hit Parader magazine?

Has music always been a part of your life?

Pretty much. My father was a singer in a band and I was always singing something. Growing up in Nashville, my grandfather was a trainer for Tennessee Walking Horses and on his farm, you would hear everything from country to rock and roll.

Was there any particular moment that led you to the industry?

I always liked to sing and play different things and music made me feel different. I always thought it was magical and I still feel that way today. I remember singing in the church choir and was so excited about singing whether it was the church or boys choir.

What may be more impressive than Sevendust’s music is the ability to
maintain a very loyal fan base.

I think we bring a family mentality to these shows because I honestly feel like we have grown up with a lot of these fans. I can look out into that crowd and remember a face and see fans that have had children, like we have now, and bring them to the show. It’s a beautiful thing. I think people know we are a real band and not a bunch of rock stars. We care and never take it for granted.

We always try to bring it and we can’t help but do that. Even when days you are tired, we give it our all. We have this pre-show ritual where we do a prayer. If the Rock God hasn’t hit you before then, it will.

How amazing was the Australian trip?

It was an incredible trip. It was summertime over there and hot but it was beautiful. We played with bands like Nonpoint, Pennywise and Slash. We knew most of those guys so it made it that much more fun.

While recording your last album, Cold Day Memory, you guys decided to do some video diaries, which became an online craze. How did that come about?

We were going to record it anyway for a DVD and the idea was brought up to maybe put some clips online. I had my reservations about it, but it turned out to be incredible. You get to see a different side of Sevendust. Where it was recorded (Groovemaster Studios in Chicago), we thought it was kind of haunted so we ran around and did a bunch of stuff.

How good of a feeling was it to get your original guitarist, Clint Lowery, back for this album?

It was like a getting a missing piece of a puzzle. That was the original seed that was planted so having him back was our sound.

You guys have tons of hits so is it challenging to put together a set list?

I can say this — it’s a good problem to have. It’s awesome to have great songs to choose from.

What’s left for Sevendust to accomplish?

I think there is a lot left for Sevendust to do. For one, we recently signed with CAA (Creative Artists Agency) so all of the sudden, it seems like there has been a fire lit under this band. CAA reps bands like Disturbed, Avenged Sevenfold and Three Days Grace. We normally wouldn’t go on the road with those bands and now we are on the same agency. So look out!

Sevendust will headline an all ages show on Tuesday, April 19, at Scout Bar in Clear Lake. Advance tickets are $25. Visit scoutbar.com for more details. Doors open at 7 p.m.