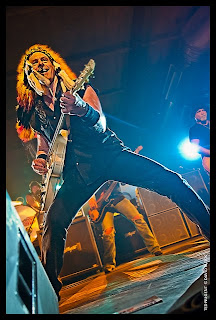 The Nuge is an avid hunter, advocate for groups such as the National Rifle Association and the right to bear arms. He’s joined the ranks of the New York Times Bestseller list with the 2000 publication God, Guns and Rock ‘N’ Roll.

Despite what they see on television, those cannot deny the fact that a career, which basically began in 1958, has led Ted Nugent to sell over 40 million records thanks to hits like “Strangehold,” “Dog Eat Dog,” “Free-for-All” and the 1977 classic “Cat Scratch Fever.”

Nugent was also involved directly with the groups the Armboy Dukes in the late 1960s and signed a record deal with Frank Zappa’s DiscReet Records and produced the song “Great White Buffalo.”

The 62-year-old rockin’ bow-hunter took time to answer some questions about his illustrious career.

Performing for over 50 years, how do you avoid the burnout factor?

I have been blessed my entire life with the ultimate lifestyle of hunting, fishing, trapping and all things — the Great Outdoors. This thrilling, perfect conservation lifestyle truly cleanses the soul and immerses me into the purity of mankind’s spiritual primal scream that demands the highest level of awareness and respect for nature that provides all sustenance for a supreme quality life. In other words, I kill many things in between tours and it is so much fun it makes me play killer music. Literally.

You have been praised for your playing style and cited as an influence by many. Who was your single greatest influence?

I suppose I would give the ultimate salute to Chuck Berry, but so many have inspired me. James Brown, Bo Diddley, Mitch Ryder and the Detroit Wheels, Wilson Pickett, the mighty Motown Funkbrothers, The Ventures, Duane Eddy, Little Richard, Jerry Lee Lewis, Elvis, Booker T & The MGs, Junior Walker and the Allstars, The Stones, Beatles, Yardbirds, Kinks, Who, Hendrix, SRV, so many.

What was the motivation for Ted Nugent Kamp for Kids?

This wonderful charity propelled by incredibly generous volunteers was a response to many requests forever for direction on how to get kids turned on to the outdoor lifestyle. Ultimately, the great Fred Bear guided me to increase my promotion of the hunting, fishing, trapping and the exciting hands-on conservation lifestyle for young people as a powerful alternative to the curse of drugs, alcohol, gangs, crime and so many other life destroying death wishes.

Do you ever utilize your position as a Michigan Co-Sheriffs Deputy?

I do indeed patrol with my fellow officers in Michigan, plus I conduct FALCON (Federal and Local Cops Organized Nationally) raids here in Texas, executing federal felony arrest raids. My adrenalin sources are not average.

There’s no doubt that you are passionate about this country. Was there a particular moment to cause you to begin speaking out for/against certain things?

As I watched a growing segment of America align themselves with obvious America haters, like anti-gun groups, anti-hunting groups, the SEIU, AFL-CIO, NEA and others unhesitatingly marching and protesting side by side with the American Communist party for example, I was compelled to maximize my moral obligation to participate in the most dynamic way as possible to earn my place in this sacred experiment in self government.

Is it true you picked up a bow before a guitar?

It was close. The merger of the mystical flight of the arrow and its pure animal soundtrack pretty much erupted simultaneously. Still does.

Do you consider any particular moment the greatest in your musical career?

Every night, every song, every jam session forever with my incredible bandmates going way back into the 1950s, most intensely the last 7-8 years with Mick Brown, Greg Smith and now back again with Derek St. Holmes provides indescribable highs and musical adventure fun beyond your wildest imagination. I am truly a blessed man. That we captured it all on my 6000th concert DVD in Detroit in 2008 says it all.