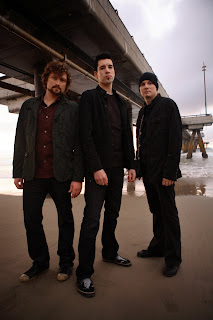 Despite just three albums under their belts, Theory of a Deadman are no longer rookies of the music industry. Hailing from Vancouver, British Columbia, the three-some, which includes Tyler Connolly (vocals/guitar), David Brenner (guitar) and Dean Beck (bass) have just put the finishing touches on their upcoming untitled fourth album on Roadrunner Records.

The band saw success with their first two records, Theory of a Deadman and Gasoline, but it was their third album in 2008 that got the Theory train rolling — Scars & Souvenirs.

The 13-track disc saw an unprecedented nine singles to radio including “So Happy,” “All or Nothing,” “Hate My Life,” “Not Meant to Be,” “By the Way” and the No. 1 “Bad Girlfriend.”

Theory of a Deadman is sharing the stage with Stone Sour on the Avalanche Tour 2011 with special guests Skillet, Halestorm and Art of Dying. The tour will play Reliant Arena, which is positioned near Reliant Stadium and Reliant Astrodome, on Tuesday, April 12, with doors opening at 5:30 p.m. Advance tickets are $35.25 and can be purchased online at Ticketmaster.com.

About a week into the 31-city tour, Brenner took time out of the tour schedule to answer some questions.

Your last studio album, ‘Scars & Souvenirs,’ was a monster. During the recording process, was there any early idea it would be a great success?

We have a good feeling going into every record we have recorded but it really helped because we worked with Howard Benson for a second time and Mike Plotnikoff was the engineer again. We were also aware of how prepared we needed to be. The prep work was there with the songs and it made them so much better.

Were you surprised at the longevity of the record, being eight singles were sent to radio?

It was surprising, but you never know what to expect because we still feel like we are a young band in this industry. Every time you face a new record, it doesn’t really matter what you’ve done in the past.

How far along is the band with the new record? Any pressure because of the previous success?

It’s written, recorded, mixed and mastered. We got a few songs back and we have rounded it down to two songs for the first single. It looks like an end of June or July release date. As far as pressure, it’s a driving force but we like to challenge ourselves. Here we are doing a fourth record and we wanted to create some of that pressure. We want to be that band that answers the call and performs under pressure. It’s nice to have something driving you because you never want to become lazy in this industry.

Can you give us some scoop?

We worked with Howard and Mike again for a third time and we didn’t want to mess with it too much because we wanted to do what we thought was going to be successful and we loved working with him so it wasn’t a hard decision. We wrote a few songs that we thought some brass horns would work well with so we experimented with some horn players coming into the studio. There’s some rock-a-billy sound to a few songs and I’m really excited about that.

Do you reflect on the growth of the band by listening to your earlier music?

I feel like we revisit those memories every night on stage, especially when we play a song from the first record. It’s cool to look back and I always look at it from a fan’s perspective because I look back on some of my favorite bands’ growth and that was one of the things I always cherished as a fan of music. You always want to have progression. It’s audible history of a band.

Any particular moment that spurred you to want to become a musician?

Growing up in Vancouver and being so close to the Seattle scene really helped the idea along. I listened to of course Pearl Jam and Nirvana but when I heard Alice in Chains, I felt like I needed to know how to do it, so I credit them on making me want to play music.

We are huge hockey fans and it helps when your team, the Vancouver Canucks, are the best team heading into the NHL playoffs. This has been their best season ever because their previous season high in points was 105 or something and they are well over that. Hopefully they can bring home the Stanley Cup. A few weeks ago, we played in an arena that had two hockey rinks and we asked if we could get on the ice and they let us. We rented some skates and found some sticks and a goal and about eight of us played hockey for about an hour and a half.