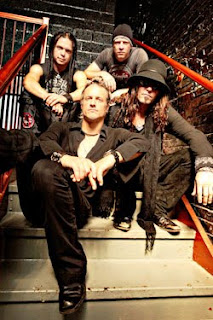 Here’s a story of a band named Fuel. With origins dating back to 1989, a rock band was born in the western part of Tennessee by two friends, Carl Bell and Jeff Abercrombie.

The two then saw Brett Scallions singing in a nearby city and were blown away by his incredible vocals and talent and had to have him. So Scallions teamed up with Bell and Abercrombie in 1993 and the group decided on the name Fuel.

After recording a few EPs, Fuel caught the eye of Epic Records, who signed the band and their first national release came in March 1998 — Sunburn. The album spawned four huge radio hits, which include “Shimmer,” “Bittersweet,” “Sunburn” and “Jesus or a Gun.” The record went toe-to-toe ranking ahead of the likes of Metallica, Green Day and Everclear.

It took Fuel two years to produce their second album, but it was nowhere near the proverbial sophomore slump. Something Like Human went double platinum and the song “Hemorrhage (In My Hands)” gave the band their first No. 1 hit.

It took even more time (three years) for the band’s third album, Natural Selection, to come out, but for Fuel fans it was well worth the wait. The song “Falls on Me” was another radio hit and “Won’t Back Down” was used on the soundtrack to the movie Daredevil. The record was later nominated for a Grammy in 2004 for best engineered album.

After that release, the band went idle until Scallions called up Abercrombie in 2009 and brought along Candiria drummer Ken Schalk to play some dates under the name “Re-Fuel.”

Abercrombie decided to work on other projects, but Scallions moved on with Schalk and hired former Shinedown bassist Brad Stewart and Jasin Todd (Shinedown) on guitars, thus the new version of Fuel.

Scallions spoke about his exciting journey in the music industry.

How’s touring been with this group of musicians?

We have been having a blast. We all got together with a common purpose, which is to play the music of Fuel, but at the same time it’s a steppingstone for us. Not just to have fun and get our rocks off, but the opportunity to make new music as well and become a real, really functioning group that we want to be. We want the music that the four of us have done, not just music of me and the other guys that used to be there. Chemistry is great. One beautiful thing about this is Jasin (lead guitar) is not Carl Bell, and Brad (bassist) is not Jeff Abercrombie, and Ken is not Kevin Miller. They are their own people and I embrace that. These are songs that I did as Fuel, but I want the guys to make it their own. Listen to the songs, pick out the important part and add your own color to it and that’s exactly what we’ve all been doing.

Any new music on the horizon?

We have one new song we are playing and there are a number of other new songs we have been tweaking on. Hopefully those songs will be ready in the new year.

World Fire Brigade is me and Sean Danielsen of the band Smile Empty Soul (lead singer/lead guitar). He’s done the bulk of the guitars on the record and I’ve done the bass. Since Sean and I are both singers, we have been sharing the spotlight. The two of us can really intertwine with the vocals aspect and that should be out in the spring. It’s about 90 percent complete.

Sunburn was a powerful debut back in 1998. It went up against several other big rock releases that year. Some 12 years later, are you surprised how relevant the record still is?

It felt great to be lumped in a group with other successful bands. To be able to contend with already successful groups and not be stuck playing in Joe’s Pub every night; to be able to have songs that people can connect to and records that people want to buy and have this longevity is a wonderful thing. You always look back on your career to see what you accomplished and I do look back and think, I did it, you know? I did what many people in this world dream about doing. I did it and I am still doing it. There is no better feeling in this entire world than to survive doing what you’ve always dreamed of doing and get paid doing it. It’s not a dead end job that I hate. I get to do what my passion is. My advice is think about your dreams and go for them. Don’t ever be afraid of catching that start. Don’t let anyone tell you it’s not possible. I’m very lucky.

Going through the trials and tribulations of Fuel, how has this effected you?

After I left Fuel in 2005, I started playing with so many other people. I got the luxury of feeling what it’s like to play with other people than the ones I had been playing with for 15 years. It was nice to get a gauge on what else was out there. I had the chance to play with Robby Krieger and Ray Manzarek of The Doors and they were just monsters. I have been fortunate enough to have good players around me. After all is said and done, I am a better musician today than I ever was.