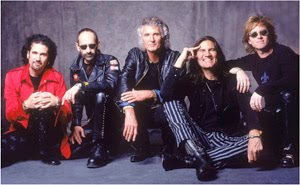 One of the most popular rock bands in history continues to spread their original sound with dozens of shows each year.

Selling over 25 million records, Grand Funk Railroad produced great hits like “I’m Your Captain (Closer to Home),” “Walk Like a Man,” “The Loco-Motion,” “Bad Time,” “Shinin’ On,” the remake of “Some Kind of Wonderful” and the timeless “We’re an American Band.”

Their history dates back to 1968 and just a few short years later, they were selling out arenas across the globe including Shea Stadium in New York. In 1971, GFR sold out Shea in a record 72 hours, which was previously held by The Beatles.

Brewer spoke 88 Miles West about the life and times of GFR.

Do you remember the first band you ever played in?

The first band I ever played in, I played guitar. I think was 12 or so. It was like an elementary school band. We were a three-piece and the drummer just had a snare and symbol with a trumpet player. We were called the Red Devils because we all wore red pants. While I was doing that, I worked my way into the junior high band. I started playing clarinet (my mother thought I would be cute if I played it). Eventually I played in the high school band and worked my way up to first chair but one day our director said he needed guys to be in the drum department for the marching band. All that was back there were girls and they can’t carry them. So I thought girls and I’m the only guy — I’m in. My dad was thrilled. He was a drummer back in the Depression days and played on Saturday nights for food and beer. He later got me a drum kit and showed me how to play.

One of GFR’s first shows was the Atlanta Pop Festival in 1969. Did your career take off from there?

Yeah, it really did. Mark (Farner) and I had been in a band together for several years with some local success in Michigan. We had played with Terry Knight and the Pack then Terry went on to New York to work for Capital Records and I kept in touch with him. He wrote me a letter and said record companies were looking for trios. So I got with Mark and we hooked up with Mel Schacher from Question Mark and the Mysterians. We finally had a few songs and Terry flew out and saw the band and that’s basically the start of Grand Funk Railroad. We changed our named to Grand Funk Railroad and our booking agent knew a guy putting together this festival down in Atlanta. We rented a van and trailer, on our dime, and went down there and played. They put us on as the opening act on opening day. We blew the crowd away and was asked to play two more times. It was one of those miraculous moments.

Was it common for drummers to also sing vocals?

Even before I started drumming, I sang some lead in the bands I played in. It just came natural for me to play drums and sing. I learned how to play drums by singing to records. It wasn’t really common, but there were drummers who sang like Buddy Miles, Don Henley and Phil Collins.

There were several times that GFR released two albums in one year.

It was a part of our record deal and most were like that. They wanted you on the road all the time and in the studio. They wanted as much product as they could get. Our contract was for two albums per year and two tours to support those records. You didn’t spend more than a week recording. We’d take a few weeks off, then rehearse and go on the road and play a 40-show tour. Then come off that, take a week off and go back to working on a new album.

What inspired the song ‘We’re an American Band?’

We were touring in support of the album Phoenix. It was the first record that we had produced ourselves because we had just split from Terry (Knight). He was suing every city we toured and we were just making a transition from being under his wing to being our own band. Radio was also changing so we had to make a three-minute hit single. The thought came into my mind as we went from town to town and I had this line that kept popping into my head — We’re comin’ to your town we’ll help you party it down. So it finally came into my head that ‘We’re an American Band’ and it sounded good. I sat down and started writing some chords and took some stories from each city that I had gathered and just made a story out of it.

GFR had some pretty interesting album covers. All the Girls in the World Beware!!! had bodybuilders with your heads imposed on them.

We had a publicist named Lynn Goldsmith, who was our second manager’s girlfriend. She was a marketing person and had all these ideas including posing nude on bales of hay.
That album had the hit song ‘Some Kind of Wonderful,’ which was originally recorded by Soul Brothers Six in 1967. How did you come to record that one?

It was one of those things where we were sitting in the back of the car from the hotel to the show and I started singing ‘I don’t need a whole lots of money’ and we would sing it acapella. It was an old R&B song with actually some Gospel in it. We always listened to this R&B station back in Flint called WAMM and they always played it and that’s where we first heard it. It was inspiring as a song and we always used it as a warmup as we were going to the gig. As we were putting material together for that album, our manager at the time said we should do that song and we did.
You guys collaborated with some heavy hitters like Frank Zappa, Bob Seger and Todd Rundgren. Any particular motives or reasoning behind that?

It was a real rush. We were trying to separate ourselves and become our own band. We knew how to make hit albums, but we needed help making hit songs and give us a kick. With Zappa, we all went to see the movie 2000 Motels and in it, Frank mentioned Grand Funk Railroad, so we thought let’s call Frank. It was very fun and inspirational to do.

How does it feel to be Homer Simpson’s favorite band?

Oh man, it’s great. They wanted to use our song ‘Shinin’ On,’ which is a song Mark and I co-wrote. In the episode, Homer is explaining to his kids about Grand Funk Railroad and says ‘the wild shirtless lyrics of Mark Farner, the bong-rattling bass of Mel Schacher and the competent drumwork of Don Brewer.’ There is no better stamp of approval.