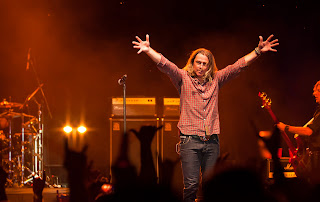 Who: Collective Soul
Where: Party by the Pool @ L'Auberge du Lac, Lake Charles LA
When: May 26, 2011
Crowd: Packed (lots of girls in bikinis)

Even if you weren't a Collective Soul fan, the weekly Party by the Pool Liquid Society summer concert series at L'Auberge du Lac in Lake Charles is the absolute place to be. Great atmosphere, no young folks, great national acts and plenty of eye candy! Plus, you can now bring your bathing suit and get into the pool.

It's been years since I have seen Collective Soul. In fact, I saw them in 1995 when they opened for Aerosmith in Houston at the Compaq Center, which is now the Lakewood Church.

The band has aged well (haven't we all), but they haven't missed a beat. The band has recorded eight albums and the first four were certified platinum that produced seven No. 1 hit records, which they began the show with one in "Heavy."

They toyed with a few new sounds and later announced they would soon hit the studio for a new record that will follow their 2009 self-titled album.