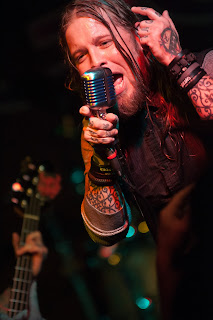 Going to a Drowning Pool show, you know you are in for a treat. It's kind of like the "death and taxes" verbiage. Expect nothing less than a high energy, well-sounding show. If you aren't in to jumping around, some crowd surfing and sweaty people rubbing up against you, then you need either stay in the back of the venue or stay home and whine about not going.

DP's performance at The Gig was no different. A great crowd watched three openers and began to chant "Drowning Pool, Drowning Poll" just moments before they took the stage.

The 15-song set opened with "Sin Begin" and ventured to the popular tunes such as "Soldiers," "Turn So Cold," "Enemy" and "37 Stitches." And when singer Ryan McCombs lit up a cigarette on stage, camera phones took to the air.

The band even covered the Billy Idol smash, "Rebel Yell," and did a spectacular job. What energy that was left by the closing song, "Bodies," was spent in surfing and moshing during the final 3:21 of the show.

I lump DP into the live show category of Sevendust and Papa Roach, and that's hard to achieve.