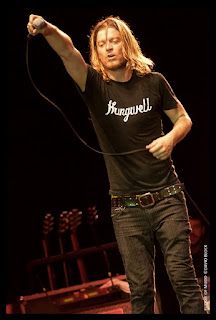 The outdoor Party by the Pool concert series at L'Auberge du Lac casino in Lake Charles LA is the place to be on the Thursday nights during the summer months.

That trend continued when Puddle of Mudd rocked the stage for nearly 90 minutes. Of course, all of the POM's classics were played, and sung loudly by the crowd, like "Control" (with a little Ozzy mixed in), "Drift & Die," and the set finale "Blurry." They also played "TNT," which was made popular by AC/DC.

That song will be one of 10 tracks on the forthcoming album, Re(disc)overed. The album should be ready for release in August and POM covers classic songs like "Rocket Man," "Gimme Shelter" and "All Right Now," added with a POM touch.

As usual, the band did not disappoint. The only negative in the 13-song set was the absence of "Spaceship." But I'll go without my favorite POM song, just to a see this band perform.

Setlist
Bleed
Control
Famous
Livin' on Borrowed Time
Drift & Die
TNT
Away from Me
Nothing Left to Lose
Think
Stoned
Psycho
She Hates Me
Blurry
Posted by Coop at 3:40 PM