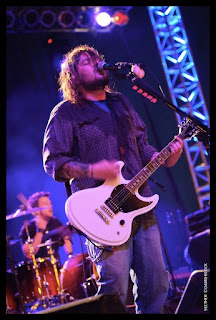 It's hard-pressed to find a more popular band on the planet right now than Seether. Their fifth album, Holding onto Strings Better Left to Fray, debuted at No. 2 on the Billboard 200 in May and the debut single, "Country Song," hit No. 1 on the rock charts.

Though guitarist Troy McLawhorn has left the band, the three-piece has never sounded better and vocalist Shaun Morgan, who was born in South Africa, now is at the fore-front with his guitar skills.

Just two songs were featured from the new album during the show, "Country Song" & "Fur Cue," but the goodies were not forgotten like "Gasoline," "Fine," "Breakdown" and the closer, "Remedy."

The first big pop from the crowd came with the third song, "Fine," then the loudest of the night was when Morgan and bassist Dale Stewart, performed an acoustic version of "Broken." If that was enough to give you chill-bumps, Seether did their own version of Nirvana's "Heart Shaped Box" - WINNING.