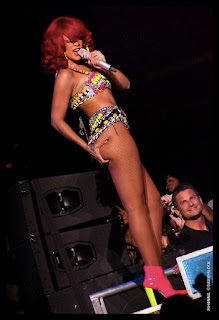 Recently crowned the most popular entertainer on Facebook with more than 40 million followers, Rihanna, just 23, is on top of the music world. The Loud Tour, which opened with a 30-minute set by DJ Dummy then a few songs by newcomer J Cole, had 88MW vibrating with anticipation.

The show opens with a over-sized static ball type thing that you may see dropping in NYC during the countdown on NYE. It opens and out comes Rihanna singing "Only Girl (In the World)." She looked amazing with above shoulder length hair with the color the vintage maroon we are so used to seeing.

With over 20 million in album sells and a plethora of hits, she sang 'em all. The two things that stuck out in my mind were her version of Prince's "Darling Nikki" and her doing "The Glamorous Life" by Sheila E.

After "Man Down," Rihanna disappears momentarily but a short video keeps our attention. When the lights come back on stage, out comes three stripper polls with Rihanna in the middle dressed in a classic black and white gangster suit directing the pole dancers.

The Barbados beauty later ran through the crowd and set up above and behind the sound board was some percussion and she played them and sang "The Glamorous Life," doing a wonderful impersonation and performance of the great Sheila E.

Add in there somewhere that one lucky male concert goer received a 45-second lap dance while chained to a rotating bed.

88MW has covered 100's, if not, a 1000 shows and this concert had the hottest babes in attendance of them all. Rihanna, OF COURSE, was the queen of the hotness.

Move over Gags.....Rihanna is taking over.

Setlist
Only Girl (In the World)
Disturbia
Shut Up and Drive
Man Down
Darling Nikki (by Prince)
S&M
Let Me
Skin
Hard
Breakin' Dishes
The Glamorous Life (by Sheila E.)
Run This Town
Live Your Life
Unfaithful
Hate That I Love You
California King Bed
Pon de Replay/What's My Name
Rude Boy
Cheers (Drink to That)
Don't Stop the Music
Take a Bow
Love the Way You Lie Pt. 2
Umbrella
Posted by Coop at 7:49 PM