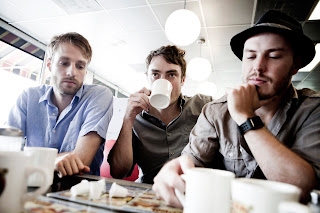 It seems this is only the beginning for the band Civil Twilight, but the band has literally traveled the globe to get where they are at today — on the way to stardom.

From Cape Town, South Africa, brothers Steven and Andrew McKellar along with Richard Wouters decided some six years ago that in order for them to be successful, they would need to leave Cape Town for Los Angeles.

Once there, the three-some began playing just about everywhere, including a restaurant, just so they could scrape up enough money to pay rent. They began to create a buzz and eventually gained a following, so the trio recorded an album on an Indie label. A few of the songs were picked up for television use for programs like the World Wrestling Entertainment, One Tree Hill, House, MD and Harper’s Island.

It didn’t take long for national labels to take notice and Wind-up Records became the lucky winner, signing the group in 2009. They released a self-titled debut in March 2009 and four singles were released to radio including “Letters from the Sky,” which charted at No. 7 at the Billboard alternative rock charts and their latest, “Next to Me.”

The band has been relentlessly touring the States playing radio festivals like Buzzfest XXV last October in Houston as well as opening for bands such as Three Days Grace and Evanescence but to be used as opening support for other acts is no longer needed.

No outlandish band gimmicks are needed, either. The sound speaks for itself.

Civil Twilight is currently headlining a tour and Steven McKellar spoke exclusively with 88 Miles West while spending a day off in New York City.

Does Cape Town have a very competitive music scene?

At the time, there wasn’t a very big music industry there. We lived in a small suburb of Cape Town and no one was really playing in bands there at the time, so we were the only band in town. It was very laid back and actually helped us because we had time to do a lot of things musically.

When did you discover that you loved music?

I discovered I could play music when I was 15 and just progressed from there. I practiced because I love it so much. By the time I was 17, I knew this was what I wanted to do. The decision was then kind of made for me.

Is that what led you to the United States?

We played Cape Town for a few years and got a bit of a following there, but we always wanted to come here. So we just bought tickets and within three months we were on a plane and flying to LA. We knew three people there and thought we could stay with them for a while. We told our friends and family we were going over to scout the land, so to speak, and would come back in three or four months. We ended up staying over here.

Once in LA, how tough was it to become noticed?

The first gig we played over here was in a restaurant. In the beginning, we played anywhere we could. Eventually we started playing at a place called Molly Malone’s and picked up a tiny little following, but it took a while to get visas to be able to stay. Once we got that taken care of, it was still tough because LA was so expensive. I don’t know how we managed, but we did.

Before you were signing a big record deal, several of your singles were actually used on different TV programs. How did that come about?

After we recorded the album, a company called Secret Road heard the record and really like it. They began putting the songs on some shows and it progressed from there. The more people that heard it, the more they liked it.

Any special meaning with the band name?

Several of the songs on the record are longer than usual. Was that something that you wanted to do?

It wasn’t something we planned. During the recording, it was just the actual mood we were in. We felt very free. The last thing that was on our mind was the length of the songs. It just happened that way. We recorded 14 songs for the album and we decided to put all of them on there. That’s something we do live anyway. We like to expand songs when we perform.

You’ve been heavily compared to Radiohead, U2 and Coldplay? Is that a good or bad thing?

I don’t think it hurts. Sometimes young bands try to emulate big bands and end up coming across like they are as big as those bands. You know what I mean? Or, they are doing it because those big bands are popular and they want to be popular. For us, we didn’t get into music like U2 until a few years ago, so we didn’t grow up listening to their stuff. This is only our first album, so eventually we hope our music will speak for itself. But I don’t mind being compared to those bands. There’s a lot worse would could be compared to!

Civil Twilight will perform an all-ages show at Warehouse Live in Houston on Feb. 25 with special guests Electric Touch and Mother/Father. Tickets are $12.