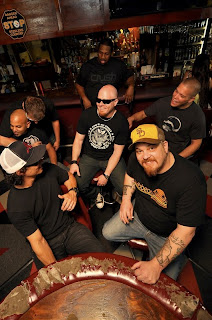 To say Danny "Boone" Alexander and Rehab has seen its ups and downs would be a huge understatement. Origins of the group date back to Warner Robins, Georgia, in 1998 when Alexander met Jason "Brooks" Buford during a stint at a rehab facility, hence the band name, then later joined up with Denny "Steak knife" Campbell.

They released an album, To Whom It May Consume, on an Indie label then signed with Sony/Epic and released Southern Discomfort, which contained the popular tunes "It Don't Matter" and "Sittin' At A Bar," otherwise known as the Bartender's song.

The band broke up, but Alexander refused to quiet and refurbished the group in 2002, taking some three years to put out Graffiti of the World.

In 2008, Epic repackaged two albums and named it Sittin' At A Bar. It was then the band would gain national attention because of the famous Bartender's song. The group joined forces with legendary outlaw singer Hank Williams Jr. for the filming of the video, which was nominated for a CMT Award.

Since their September 2010 release of Welcome Home, the band split with national label Universal Republic and signed with Average Joe’s Records in Nashville, which rosters artists such as Colt Ford, Brantley Gilbert and Josh Gracin.

Rehab is headlining the Lack of Luxury tour at The Gig on Crockett Street on Saturday, Feb. 19, at 8 p.m. Advance tickets are $15 and can be purchased online at thegigbeaumont.com, area Florida Tans locations and Guitar & Banjo Studio in Beaumont.

Original member and frontman Danny "Boone" Alexander spoke with 88 Miles West while in California during one of their many stops on the Lack of Luxury tour.

How did the preparation for this album compare to those of the past?

We had less time to write 'Welcome Home' because we were on the road and we had plenty of songs written when we turned them in and the label declined them. They wanted something
simple and heartfelt and something that could be played on CMT (Country Music Television). I was like, oh okay. So I said let’s get back in and write more songs.

Were you cool with that direction?

I wasn’t happy with the fact they declined the songs that we spent time on, but the album is really good.

What are some of your favorites on the new record?

I'm glad you mentioned 'Rideout Chick.' That song is drawing comparison to the Bartender's Song.

Yeah, maybe so. 'Rideout Chick' is about girl that a lot of people know — dirty feet but still kind of hot. She'll ride with you to California if you need her too.

What were some of the inspirations you used for writing this album?

One song in particular, 'Talk About,' is about being on the road, so that was easy to write. 'Old Friends' is typical around my house. It's late at night and you want someone to come over and drink a beer with you and blah, blah, blah. There are a lot of things to write about. Some days you can put it together and others you can't.

This album seems more mellow. What has been the vibe from the old school Rehab fans with the new album?

We have talked to some that said they didn't like it at first but after listening to it again, they get it. It’s works with everything we have done. Our music used to be all over the place, and I like it like that, but when you are working for a label and they ask for specifics, you have to do it that way. When you are an artist, you don’t like to be told what to do when it comes to art. But when we did what we were told to do, it actually came out good.

After the record came out, didn't you part was with Universal Republic?

Yeah, we signed with Average Joe’s Records in Nashville. With Universal, they were spending more time with other artists. There are good people at Universal so we asked them if we
could get out of the contract and they let us. Definitely no hard feelings.

How have the fans treated you on this tour?

Well, it’s a different look for us anyway because Foz and Lamar (Williams Jr.) aren’t with us, so that sucks. We will hook back up, but they are currently working on some records. We
have done really well on the West Coast. It’s great to be a long way from home and be able to draw a lot of people. It’s doesn’t make you feel so regional.