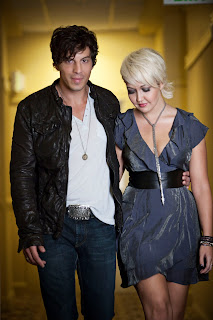 Meghan Linsey and Joshua Scott Jones stole the hearts of millions when they won the reality show Can You Duet on CMT.

Better known as Steel Magnolia, the duo went on to sign a contract with Big Machine Records and just last month released their self-titled debut album.

Despite the record coming out last month, the first single was released to radio in 2009 called "Keep On Lovin' You" and it was an instant hit peaking at No. 4 on the Billboard Country chart.

They've since been nominated for several awards by the Academy of Country Music, Country Music Association and the new American Country Awards, but before all that, they were stealing each other's hearts.

Linsey, from Ponchatoula, La., moved to Nashville and found a job hosting karaoke. It was there she found the love of her life and a pretty good business partner. The rest is history.

The 23-year-old beauty spoke with 88 Miles West about life in Louisiana, moving to Nashville and being able to perform at the Grand Ole Opry.

Growing up in Louisiana, was there a Cajun influence in any of your music?

My mom helped me put a band together when I was 14 years old. The guys in the band were old enough to be my dad and they had played in bars in New Orleans their whole lives. So there is some influence there, plus we played a variety of music. Just being from there you can’t help but absorb some of that.

What led you to Nashville?

Well, I wanted to do music, but my mom said if I went then I had to go to school up there. So I enrolled at Belmont University for a semester when I moved there. I started working at a karaoke bar and actually worked there for five years. That’s where I met Josh.

Did he ask you out first?

Oh yeah. He was pretty funny. He came in and sang some Rolling Stones and some rock stuff. I would play some songs in between people singing and I was playing some AC/DC and he came up and asked if I liked AC/DC. And that was all it took.

Once you started dating, when did you realize that music was the way to go?

We were doing our separate things. Even though we were together, he was doing his music and I was doing my own stuff. After a year or so into the relationship, we wrote our first song together called 'Edge of Goodbye.' As we were writing it, we thought it would be a cool duet. We would do some songwriter rounds going out and performing. He would sing, then play guitar for me and we would end it by performing that song. It caught on.

Is that what led you guys to audition for 'Can You Duet'?

We actually got talked into doing that show. We had already been performing together for about two or three years and a friend of ours knew a producer of that show looking for duos. She called us and bugged us but we didn’t want to do a reality show. She then called us the day of the show and we went down there. We kept making it through the rounds and we never expected any of that.

Did you have time to celebrate the win?

Not much. It's hard to prepare for something like that because the next day we were filming a video and doing press. Since winning that show, we literally haven’t been home for more than two days. We went on a radio tour then went on tour with Brad Paisley. It's been constant.

Were you concerned about a reality show jinx?

We were hesitant to do a reality show in the first place because there is that stigma that comes with being on a reality show and not being a real artist. We wondered if people were really going to take us seriously but success of the first single spoke for itself. It was actually a great platform for us to develop a fan base. I think we are past the reality show premise and whether or not we are real.

Listening to the record, I hear some old and current Country sound.

We didn’t want to be dismissed for not being country and that was a big thing for us because we both are so rooted in Country music. We both have so many musical influences and we wanted that to show on the record. And I think that keeps us unique and sets us a part is the fact we have so many different sounds within the music. There are elements of everything for everyone on this album. One of our main goals with this record was to put out something that anyone could listen to and find something they could like.

Other than the first single, any particular song on the album you really like?

'Edge of Goodbye' is one of those songs we have to do every show. It's got a fun banter back and forth with the verses then it kicks into that powerful chorus in the middle. It was the first song we wrote together and the sound of it is what we based our group and sound around.

Any added pressure on your personal relationship now the record is out and you’re being nominated for awards and such?

Every relationship you are in there is pressure, but this one does have some added pressure. I think we are really good at separating the business side of things when we are home. We haven’t changed much other than our careers have changed. Being on tour with Blake Shelton, who is engaged to Miranda Lambert, I got a chance to talk with her about their relationship and keeping it separate from the business. She said they go fishing and hunting and go off and do things other than music. We hope to get to that point one day to be able to have other places to go and spend time together.

You have a new single out, 'Last Night Again,' up for an award that fans can go vote for.

We are super excited about the new single because it’s the first song we have cowritten that has been released. As a songwriter, it’s exciting to hear your song on the radio. It’s cool as an artist, but to hear both, it’s a real dream come true for both of us. We are up for two ACM (Academy of Country Music) Awards and one you can vote. It's for Top New Vocal Duo or Group and fans can go to www.voteacm.com to vote. We are honored to be nominated for awards, have an album out and get to do this full time.

I have to ask you what it was like performing on the Grand Ole Opry?

Everyone always asks what the highlight of 2010 was, and we had some great highlights like being nominated for awards and touring with Brad Paisley, but it was the Opry. It sounds cheesy but it’s one of those indescribable feelings. It’s the holy grail of Country music. It was like a ghostly-good feeling. My mom told me she listened to the Grand Ole Opry on the radio when she was a kid and to be able to play on that stage — it was truly amazing.