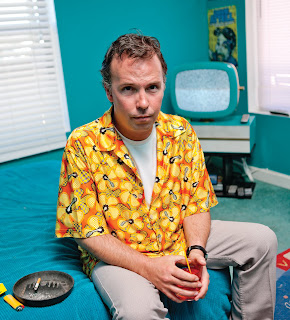 There’s not much that can be said that hasn’t already when it comes to Doug Stanhope. His resume includes running for President in 2008, appearing at every major comedy festival, co-hosting The Man Show with Joe Rogan, recording more than 10 albums and DVDs, and authoring a book. He recently appeared on the FX television show Louie with Louis C.K. and earlier this year signed with Roadrunner Records and released Oslo: Burning The Bridge To Nowhere, which was filmed in Norway.

Stanhope has a handful of dates remaining on the tour, which includes one show at The Improv in Houston on Wednesday, Nov. 9, at 8 p.m. Tickets are $25 and can be purchased online by clicking HERE.

Before the interview began, Stanhope lashed out with, “Just don’t ask me where do I get my ideas from and what made me want to be a comedian and we’ll be fine.” Typical Stanhope.

How do you process all this material?

You know what, I have no idea. My brain must work organically.

It’s amazing how you do it. I was watching ‘Oslo’ and you coughed in the middle of a sentence and you mentioned it was a death cough. A super reaction. Your brain must be soaked with information.

Soaked would be the accurate word, but not necessarily with information.

Are you still a firm believer that pussy is the No. 1 factor we deal with?

Oh, yes. Everything is driven by it. It’s the fuel that runs the machine. I’m glad I don’t care anymore, but at the same time, I probably wouldn’t be successful if it weren’t for that. It’s always the root cause and that’s why I am so fucking lazy now. There’s no one to impress.

I recently heard you on Howard Stern with your girlfriend and you seemed happy. Are you still with her?

Yeah, it’s a perfect match. I’ve never been in a relationship where I could honestly say that. You have to say it (in) most relationships because she is going to read the interview. Sometimes you can’t be honest like you used to be because you would be ratting them out. Like going out and doing mushrooms with your buddy but his a firefighter and you have to change a little bit of the story and say you were in Sacramento instead of Oklahoma City. You know his friends are reading up updates on my Web site. Like this guy brought his prostitute girlfriend to a show of mine and I can’t say that because he’s got a wife and kids at home. The Internet has ruined all secret keeping.

You’ve done some random things like picking up hitchhikers and so forth. What’s the last random thing you’ve done?

You get to a place where you don’t notice things are out of sorts. When in-laws come over for Thanksgiving you notice you are a little different that other people. I remember one girlfriend I was dating, her mother was coming to meet me for the first time and we had been together for about a year or so. The mother was prudish and homebound, so I had to de-porn my house. There is a really funny comedian from Austin named Brendon Walsh. He drew a picture of a guy with 13 cocks dangling in his face and the caption read ‘baker’s dozen’ and I put it on my refrigerator. I forgot to take it down when my brother brought his kids over. Here's a picture of 13 cocks at eye level with the kids and I didn’t realize it the whole time they were here.

What’s the biggest misconception about you?

People think I party more than I actually do. They will come to the house for the first time and think it’s going to be a Hunter S. Thompson experience. I’m a pretty boring guy. I do a lot of nothing really well.

You’ve mentioned before that you love Vodka. What’s your favorite kind?

I change them up quiet often but normally it’s Vodka with grapefruit.

Having a drink help you on stage?

The last time I remembering performing sober was 2003. It was a random college that didn’t allow drinking. Glad I only had to do 25 minutes. That’s one of the few shows I can remember in the last decade.

You talk about things, not just what other comedians won’t discuss, but other people refuse to talk about like losing your sex drive. Are you comfortable discussing those things?

I gravitate towards those things. I wish I had something else to tell you that would be off-putting, but I haven’t done much in the last couple of years.

Your fan base in the UK is off the charts and you’ve said that they are far more brutal that comedy fans over here in the U.S. Why so?

They are comedy savvy and they treat comedy like an art form. If you have a bad show over there, it makes the paper. Over here, people go to birthday parties or adult Chuck E. Cheeses for fun times.

What is more of a problem — overpopulation or public stupidity?

Overpopulation is kind of a world thing. People are in their own little worlds now with all these distractions like gadget phones, Twitter, Facebook, apps on phones, 300 channels and shit. What was the question again?

Well, I’ve heard you mention both of these in one of your shows. I didn’t know if you thought one was more relevant than the other.

(Laughs). In the long run, it will be over population. But I won’t be around to deal with and I’m not leaving any litter behind so I won’t give a shit.

Would you ever consider doing television again?

Doing 'Louie' with Louis C.K. was a lot of fun. I hate the thought of acting, it disturbs you and it wasn’t a fun process for me. Doing it with Louis made it different than most because usually it’s cringing thinking how much they must fucking hate the decision they made to hire me.

What’s next on the agenda for Doug Stanhope?

I’ll have another DVD coming out for Christmas and have a rough outline for another one after that. I’m going to Iceland to hang out with the mayor of Reykjavik for a week and that’s inspiring. Another friend of mine said he was going and a friend of mine who is a comedian got elected mayor on a goof when their economy shit the bed. So I sent him an email telling him we should meet and sign some documents of historic significance. I’m going to perform in a prison over there too. I didn’t want to do a show while I was there because shows fuck up vacations. A prison is different because there won’t be any critics and I can do all my old shit. I can ruin the show and it wouldn’t hurt my demographic.