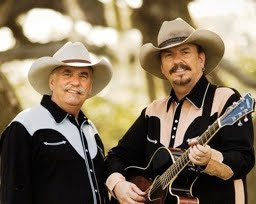 If not for brothers Howard and David Bellamy, there may not be any Brooks and Dunn, Big & Rich or Montgomery Gentry.

They’ve recorded over 50 albums and charted more than 50 songs with 20 No. 1 hits like “Let Your Love Flow,” “If I Said You Had a Beautiful Body Would You Hold It Against Me,” “For All the Wrong Reasons,” “Sugar Daddy” and “Redneck Girls.”

Both born in Darby, Florida, which is near the family farm where they today call their home, the two were raised around music as their father played music and began performing at local events like rattlesnake rounds and such, then were introduced to country music musician Jim Stafford.

The younger David wrote “Spiders and Snakes,” which became a big hit for Stafford, and gave the brothers enough money to move to Los Angeles to pursue a music dream. It was then they signed with Curb Records and the rest is history.

Before heading overseas to play 10 shows in Switzerland, Howard Bellamy talked with 88 Miles West about his career in music and what it still means to tour the world.

The Bellamy Brothers are still going strong some 35 years later.

I don’t know how relevant we are, but we still do about 175 shows a year and still enjoy traveling the world. We are still having fun and drawing good crowds so it’s a good feeling. Dave and I don’t know much about doing anything else so I guess that’s why we stuck with it so long.

Growing up in a home with your dad, a musician, was it just natural to follow in his footsteps?

We were raised on a cattle ranch in central Florida and grew up listening to him play music with his friends, drink a little moonshine until our mother got tired of it, then go to church on Sundays. That’s how we were raised. We just started playing music for the fun of it and never had a clue you could make a career out of it.

You’ve done an incredible job at it because your songs can still be heard today.

We don’t have a certain approach to writing songs, just try to write really good ones. We’ve been lucky to have some songs that have had long lives. That’s probably the reason why we are still playing. People love those songs and the radio keeps playing them. Times are so crazy now that people love to flashback to the good times.

You are internationally known and have a great following in other countries. Not many in country music can say that.

Actually, it started that way from the very beginning. “Let Your Love Flow” was a No. 1 pop record in 15 countries around the world and it was a hit in Europe before it was played in the United States. Because of that song, it opened up a lot of international doors then came ‘...Beautiful Body,’ which also did very well. We’ve been touring the world for the entire 35 years. It wasn’t something that came later in our careers. Before we play at Nutty Jerry’s, we will be flying in from Switzerland.

It must have been some good times with Jim Stafford. He’s a character.

We spent a lot of time with Jim in the early ’70s. He is an incredibly talented guy and performer. Stafford was raised around another Florida boy, Bobby Braddock, so it was a nest of musicians here and we all knew each other. We moved out to Los Angeles for about five years to pursue our career, that’s where we recorded ‘Let Your Love Flow’ and Stafford recorded ‘Spiders and Snakes,’ which David wrote. We actually lived in Stafford’s basement for a time period along with Gallagher, the comedian. He was Stafford’s road manager for a while. You talk about a nut house. We saw the sledge-o-matic being invented.

How did you guys come to the idea to record the album ‘Reggae Cowboys,’ which was a Reggae record?

Being born and raised in Florida in the orange groves, we worked for our dad out in the field and during the fall when the fruit ripened, the Jamaicans would migrate to Florida and pick oranges in November. We worked with them picking fruit and we loved it because they would sing all day, you know, to break the monotony of work, they would sing island songs. We were exposed to a lot of that. Between that and listening to dad play old Jimmy Rodgers’ songs, it was something we really enjoyed. Maybe that’s why we are so confused musically.

You and David released a song called ‘Jalapeños’ early this year. It wasn’t a typical Bellamy Brothers’ song. Radio stations wouldn’t play it because some of the content in the lyrics. You reference life isn’t like a bowl of cherries, more like a jar of jalapenos because what you do and say today, it don’t go away and stay, it comes back and burns your ass. Plus there are mentions of President Obama, Glenn Beck, Tiger Woods and Bernie Madoff. What inspired that?

David wrote it. We like to make fun of politicians and lawyers; you know, those people who like to make our lives miserable. We were seeing how many people we could tick off and did a pretty good job of it.

Do you keep up with the current country music scene?

We do. We have accepted the fact you are not going to see us on charts because of the politics in radio and record labels, but we like several new acts — especially Miranda Lambert. We’ve become good friends with her and Blake Shelton and have been invited to their wedding.

Anything new coming up that you guys are working on?

We still live on our old family ranch in Florida, which has been in our family since 1870. People always wonder why we didn’t move to Nashville, but it’s because we have some deep roots there. We’ve had a studio there for several years now and we’re always in there recording or writing. There’s still a lot of material to be recorded. Exactly what the next project will be, we haven’t decided yet. We like to do stuff that hasn’t been done and try to stay current. We’ve never given up yet on having another hit record.