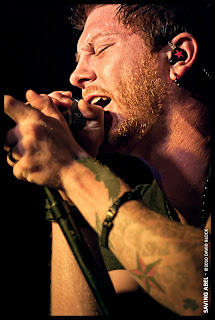 Mississippi is known as the “Birthplace of America’s Music.” Of course one of the first things that comes to mind is that Tupelo was the birthplace of Elvis and dozens of blues musicians honed their skills in the state including Sam Cooke, Bo Diddley, John Lee Hooker, B.B. King and Muddy Waters.

The band formed seven years ago in Corinth, which sits in the northeastern corner of the state, and with two albums under their belts, their popularity continues to soar. Not only with those who enjoy good rock music in the United States, but those serving in the military overseas. Saving Abel is seeing great success with two national album releases and are celebrating their first No.1 single on the mainstream rock charts, “The Sex Is Good,” off the 2010 sophomore record Miss America.

After signing a record deal with Virgin Records, they released their self-titled debut in 2008 and
three singles released to radio all charted in the Top 5 including “Addicted,” “18 Days” and “Drowning (Face Down).” Those singles helped their debut sell over 500,000 copies certifying it as a gold record.

Lead singer Jared Weeks spoke with 88 Miles West about songwriting, the band’s support for the military and what’s next for Saving Abel.

With a state rich with musical history, was music a big part of your childhood?

My family was very music-oriented. My grandmother played piano at church, my dad played guitar, my uncle played the drums so I was blessed to grow up around music. I remember on Saturday doing chores around the house, my dad would play old Hank Williams’ records and sitting on the floor listening to that and some Beatles. Growing up, I listened to it all from Lynyrd Skynyrd to Garth Brooks. Regardless of what it was, if the music was good and you could feel it, there wasn’t anything wrong with it. I will say that once I heard 3 Doors Down was from Mississippi, you weren’t going to stop me. If they could do it, I was going to.

Saving Abel is a tour-heavy band. When did you find time to write and record ‘Miss America’?

Well, as you know, it has nothing to do with the beauty pageant. Ha, ha. We actually did this album while we were touring and supporting the first record. On the tour bus, we were all on our Mac computers doing some writing and a little recording and when we had three days off, we flew to Nashville and took Skidd (Mills, album producer) what we had written or recorded. We also emailed back and forth with him. He is like a super-producer so we would do that. Whenever we had time off, we recorded. This second record was important to us because of the success of the first one. We wanted to avoid the sophomore slump.

How cool was it to work with songwriter Marti Frederiksen? He’s hooked up with the likes of Gavin Rossdale, Aerosmith and Def Leppard.

He was way cool and very versatile. Our very last song we recorded on the album was ‘Miss America’ and he came in with great ideas for the song. We were about to head to Iraq and play some shows for the troops and that song really hit home with us because it is about those guys fighting for our freedoms. While we were there riding the bus with our bulletproof helmets on going to perform, we asked ourselves what we wanted to name the album and we all said at the same time — ‘Miss America.’ Getting to play some rock-n-roll for these people and naming the album that was the least we could do.

That brings to mind a single off the first album, ‘18 Days.’ That song seemed to have a military theme to it.

That song was written as a love song but before a video was shot for that song, a fan made a video to that song on Myspace. She used that song and at the same time showed pictures of troops coming home and meeting up with their families. It was awesome but that’s how that song ended up with that theme. So we shot the official video on the USS Carl Vinson in San Francisco and it all tied in and was a beautiful experience.

Going and playing for the troops must have meant a ton to you guys.

I have five uncles and four of the five served in the military so I grew up a little bit in that environment. Our whole band, we either know somebody or are related to someone that has served our country. Going over there wasn’t one of those things were we just up and decided to go. After the ‘18 Days’ video was released, we also started our shows talking about the military and getting support for them, but we didn’t want to be that band that just talked about it. We wanted to experience it and it just so happened those men and women requested us so we went to Iraq, Kuwait and Qatar. It was great to perform for those guys and girls because they are all proud of what they do.

A song that I really like off the second record is ‘I’m Still Alive.’ It’s not your typical Saving Abel song.

Man, I am glad you said that. I wrote that song and it’s one of my favorites on the album. I don’t think it’s going to be released as a single. It’s like an ace in the hole. A lot of work went into that song and it’s about being on the road and people thinking you have a dream life, but that’s not necessarily how you feel all the time. I wrote that song from a deep, dark secret hole inside my soul. We actually hired an orchestra and they wrote the symphony to it.

The versatility of this record is great because another ditty I like is ‘Mississippi Moonshine.’

That’s crazy because that’s probably my second favorite song on the album. When the sound of the song was put together, it was like getting on the front porch and doing some foot stomping while drinking your moonshine.

Though you are still touring in support of the record, have you guys targeted a date for the third album?

We are still in the early stages of discussing it, but we have been doing some writing. One thing I will say is that the third album will be more aggressive.