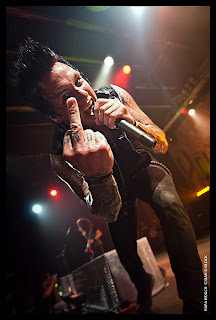 Arriving at Warehouse Live an hour before doors opened, there was already a line to get into the venue about 200 people deep. Now that my friends is a dedicated following (plus they did a pre-show meet & greet for some lucky fans, and many bands won't do such a thing.)

P-Roach opened the show with the hard-hitting "Getting Away with Murder" and it was difficult to hear Jacoby Shaddix's vocals (not really) because the crowd was signing louder than he was.

Shaddix is one of the best, if not the best, rock-and-roll frontmen in the business. His vocals are good, energy is always there and his crowd interaction is top notch.

The West Coast rockers have released six albums on a major record label and the band did a good job of spreading the 16-song set out to make sure each album was covered. Four of their newest songs were played from the latest release , Time for Annihilation, and four tunes from The Paramour Sessions.

If someone put a gun to my head and ask me to find a negative in the show, and it would be knit-picking and of course only to save my life, would be they didn't perform "Broken Home," which is one of my P-Roach favorites.

I have seen over 1,000 live shows and it's hard-pressed to find a band with as much energy every time they play than Papa Roach. The boys from Sacramento do it, and do it well.

Papa Roach set list
Getting Away with Murder
Burn
Between Angels and Insects
Forever
Hollywood Whore
Time Is Running Out
...To Be Loved
Born with Nothing, Die with Everything
Enemy
Crash
Kick in the Teeth
Lifeline
One Track Mind
Scars
Dead Cell
Last Resort
Posted by Coop at 12:18 PM