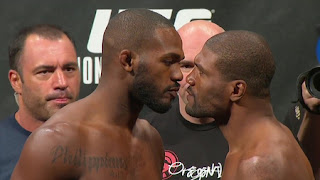 Jones is the youngest UFC champ in history (so far, hehe), and has the longest reach in UFC history as well, at 84.5 inches. He made quick work of legendary Muay Thai fighter Mauricio "Shogun" Rua for the title, and has notable victories over Ryan Bader, Stephan Bonnar, Vladimir Matyushenko, and Brandon Vera.

Jackson is an MMA veteran who has beaten such fighters as Chuck Liddell, Wanderlei Silva, Dan Henderson, and Keith Jardine. He has heavy hands and good wrestling to complement his iron chin, however his chin did show weaknesses against Lyoto Machida even though he went on to a controversial split decision win.

REACH: Jones by far has more reach than Rampage, and since punching is Rampage's bread and butter, Jones gets the edge.

EXPERIENCE: Rampage gets the edge. He has fought the best in the business in the UFC and Pride.

STAND UP: As far as versatility in striking, as well as technique, Jones gets the edge.

POWER: Rampage, hands down, has more power than the champ. Rampage.

WRESTLING: Jackson has good wrestling, but Jones has proven that he has top notch skills. Jones.

SUBMISSIONS: While Jackson technically holds more submission wins, I believe that Jones has better submission skills. Rampage's last submission victory was in 2003. I give the edge to Jones.

CARDIO/ENDURANCE: Jackson has been in many wars with tough fighters but, to be honest, he's getting old. As shown in the fights against Machida and Matt Hamill, he doesn't have the endurance he used to have. Against the much younger, and faster, Jones, I don't think you can compare.

Jones has my favor in 5 out of the 7 categories that I believe will be most important in this fight. That gives him about a 70% chance of winning, compared to Jackson's 30%.

Jackson's only chance in this fight would be to corner the champ, get in close, and land power punches. However, with the long reach of Jones, it wont be easy. Just ask Shogun...

WINNER: Jon Jones by TKO in the later rounds (4th or 5th). The reason I believe it will happen in the later rounds is because of Jones' young athleticism; I believe Jackson will be worn out by then. This should be an entertaining fight, but I do expect Jones to win.
Posted by Coop at 4:39 PM

Email ThisBlogThis!Share to TwitterShare to FacebookShare to Pinterest
Labels: MMA