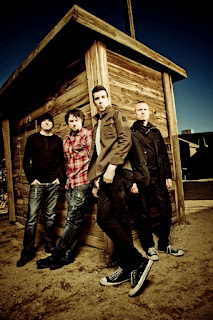 Following the highly successful third album Scars and Souvenirs, which reached platinum status and saw an unprecedented nine of its 12 tracks released to radio, Canadian rockers Theory of a Deadman have returned to the road in support of their fourth project titled The Truth Is ... via Roadrunner Records.

The album was released in July and has already hit No. 1 on three of the Billboard charts (hard rock, rock, alternative), and the first single, “Lowlife,” gave the band its second No. 1 song. “Out of My Head” and “Bitch Came Back” have been the second and third singles sent to radio.

Theory of a Deadman formed in 2001, and their debut album was a self-titled record in 2002 that was produced and co-written by Nickelback frontman Chad Kroeger.

Gasoline was the sophomore release and produced the hit tunes “No Surprise,” “Say Goodbye” and the ballad “Santa Monica.”

For those who hadn’t heard the band up until 2008 certainly took notice when the second single of Scars and Souvenirs came out, “Bad Girlfriend.” The catchy song not only hit No. 1 on the charts, but also became one of the most popular ringtones of all time.

Constantly on the road, the tour-heavy boys from north of the border have played with the likes of Mötley Crüe on Crüe Fest 2, Daughtry, Avalanche Tour with Stone Sour and are fresh off the 2011 Carnival of Madness with Alter Bridge.

We spoke with lead singer Tyler Connolly about a variety of subjects including the new album, co-writing with former American Idol judge and hit maker Kara DioGuardi and even recording music with a homeless banjo picker.

Any added pressure going into the studio to record the new album after all the success from ‘Scars and Souvenirs?’

Yes, it was. I would by lying if I said there wasn’t, but it was good pressure. I don’t think I lost much sleep, but there was some stress. Once you have success like that, then you want to keep it going. There’s a lot of thinking involved in what direction you want to go in. Like do you want to keep it the same and have another “Bad Girlfriend” song? Those songs have done well for us but you don’t want to release five records and they all sound like the same tiring stuff. With this album, there was a balance to be made and a lot more thought. The last three records, we just wrote songs and put them on a record.

Listening to this album, the lyrics seem more personal.

I went through a marital break-up, which was devastating for me. My manager said he had been through a few divorces and it’s the toughest time of your life, but it makes for a great rock record. It’s really good material for the fans because they can relate to it. Fans like the songs that are the most honest and most relatable.

I noticed in the last album, Kara DioGuardi helped co-write a song; she starred in the video and helped you write three songs on this record. How was it working with a female songwriter? It was different. Up until that point on the last album, I never worked with any songwriters per say. Chad (Kroeger), who produced our first record, helped co-write some songs with us on the first album. She had written a lot of songs for pop artists like Britney Spears, Pink, Enrique Iglesias, Christina Aguilera and Gwen Stefani, but she had never written a song for a rock band. She was probably just as curious as I was. She actually lives about a mile from my house in Los Angeles and I went over there with my guitar, drank some wine and wrote “Meant to Be.” After we finished it, I sent it to her and she immediately said it was a hit so, so I was like, OK, let’s see what happens. This record, it just made since to do the same. It would have been stupid not to call her up again and work with her again.

It also seems the band has a great relationship with producer Howard Benson. He has a great resume and has been with you since the second record.

Working with him is great, but the first record with him was tough. We didn’t have a lot of experience with producers. Once we got past the personalities and the creative stuff, it turned out to be an amazing partnership and friendship with him. That’s why we have done three records with him. A lot of people say you shouldn’t use the same producer, but this feels great for us.

Do you have a personal favorite on the album?

Probably “We Were Men,” which is the last track. It’s the first time I have ever written a military song. We travel a lot and have a lot of military fans that do come to the show. I remember once, we met some guys and he said the next day he was getting shipped out to Afghanistan. We also heard some not-so-good ones. One guy told me that he saw us two years ago with his buddy, who had since died in Iraq. I think it was time in my career to write a song like that. During a recent meet-and-greet, a fan who was in the Air Force said that was his favorite song. It was like the first time I didn’t write a relationship song or something goofy.

Did you guys really record a song with a homeless man?

Yeah. Well, I don’t know if he was homeless, but he sure did look like it. He was on the street corner playing a banjo outside the studio and while I walked to the store to grab a drink, I started talking to him and gave him some money. I went back inside the studio and told the guys this old dude was outside jamming on the banjo, and they said well bring him inside. I had to call our manager and call our lawyers and make sure all this paperwork was signed just to come in and play banjo on a song. He ended up making about $800 for about a half hour’s work. You can hear it on “What Was I Thinking.”

You guys are tour heavy. How do you deal with the burnout factor?

It’s easy to get burned out, but playing each night for fans is our drug that keeps us going.