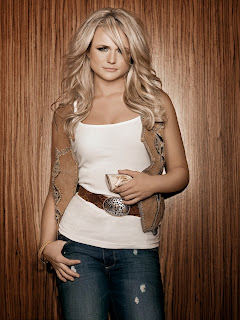 The 26-year-old singer/songwriter is touring in support of her 2009 album, Revolution, which gave Lambert her first No. 1 single, “The House That Built Me.” The album was her third to debut at No. 1. With that, she became only the third female country singer in history to have three records debut at No. 1 on Billboard Country Albums.

In September, it was announced that she was nominated for nine CMA Awards, which was also a record for a female with the most nominations in a single year, which includes Entertainer of the Year, Female Vocalist, Single, Song and Album of the Year.

Born in Longview, Lambert began playing music at 16 and in 2003 she finished third on the reality show Nashville Star. She released her first national record, Kerosene, which debuted at No. 1 and sold over a million copies giving it platinum status.

Then came Crazy Ex-Girlfriend in 2007 and Revolution in 2009. Popular singles include “Me and Charlie Talking,” “Kerosene,” “Crazy Ex-Girlfriend,” “Famous in a Small Town,” “Gunpowder and Lead,” “White Liar” and her newest to radio, “Only Prettier.”

Lambert took time out of her schedule to answer some questions.

As a native Texan, growing up, what music did you enjoy listening to?

I absolutely love classic country and it’s no secret that Merle Haggard was and is one of my favorites. I really love Jack Ingram’s music, and Alison Moore, as well. But in addition to country my family used to listen to southern rock like CCR (Creedance Clearwater Revival) and Lynyrd Skynyrd.

I learned that you have to follow your heart and your art, no matter what people tell you; it’s still your name at the door and you are responsible for what happens next. Good advice is great, but it has to make sense in your life. I think in your twenties its natural to mature as a person because a lot of the experiences are a first as a young adult and you try to figure things out. I understand more now, especially that I have a lot more to learn. Being on the road and traveling the country for the last five years taught me a lot about myself and others. I am engaged to a wonderful man and have a great farm as my home, with a ‘bag full’ of marvelous animals and of course my dogs! Professionally, I’m more comfortable in my live show, as I had a chance to get better at entertaining partly by watching all the incredible artists I had a chance to tour with in the past, and partly because I have come to know myself better.

How important is it to have a No. 1 single?

I am not sure about its importance, but it feels great to have one. Just to think that a song that you recorded is the most played single in the country...Pretty wonderful.

Three straight albums have debuted at No.1, but 'Revolution' has helped get you a record nine CMA nominations and your first No. 1 single. Did you know when writing and recording this one that it was going to be special? Did you go into this album doing anything different than the previous albums?

I wanted this record to reflect both sides of my personality and I think I accomplished that. ‘Revolution’ is much more revealing into my personal life than my first album, 'Kerosene' and then the follow up, 'Crazy Ex-Girlfriend'. As a songwriter you can sometimes ‘hide’ behind the lyrics and not let the listener know the real person behind them. In 'Revolution' I feel like I didn’t hold anything back from my fans. I let them in on every aspect of where I am at in life right now and that kind of felt like a little private revolution for me, hence the name of the record. As I am maturing as a person and an artist I learned that even if it’s scary to reveal yourself to your fans in your music, it’s also freeing at the same time.

Coming up on your 27th birthday, it seems like you are already an established veteran in the industry. Are you already looking ahead on what’s next? Anything left for you do accomplish?

I’m going to start writing for the next album soon, which seems crazy, because I feel like this one just came out! Once I finish a record, I usually don’t write for a really long time because I’m burnt out. But this time I have been writing so much, just all kinds of songs with all different people. I’m really excited! But I’m just really excited in general now — I have everything in line for once, and it’s awesome. My personal life, my music, and I feel more creative than ever. I guess success brings on that creativity because it’s working, so I want to do it some more.