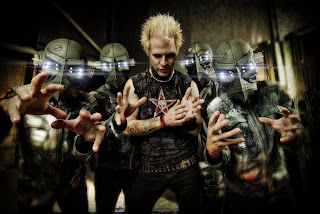 Spider One is the brainchild behind rockers Powerman 5000. From Massachusetts, Spider created the group nearly 15 years ago and pumped out popular tunes including “When Worlds Collide,” “Nobody’s Real,” “Bombshell” and current hits “Super Villain,” “V Is for Vampire” and “Show Me What You’ve Got” from the 2009 album, Somewhere on the Other Side of Nowhere.

Spider even put the Powerman touch on the 1983 radio smash “Relax” by Frankie Goes to Hollywood, which made the Zoolander soundtrack. The band’s songs were also included on other soundtracks as well as dozens of video games. No more does he live under the shadow of older brother Rob Zombie.

I scored an interview with Spider One, who says Halloween is his absolute favorite holiday.

Growing up, were you a ‘Clockwork Orange’ type of kid?

Oh yea. That was one of my favorite movies. Actually, Powerman did a Halloween show in 2006 and we dressed up as the gang from ‘Clockwork Orange.’ It was a pretty badass visual on stage. Halloween is and always was my favorite time of year. I live in LA now, but grew up near Boston, which is very much in the fall like a Halloween vibe. We would go all out like turning the backyard into a graveyard.

Your work is brilliant. Tell me your thought process of heading into a new record.

Writing music and songs is a weird thing. I always joke about people who can tell you a place, time and coffee shop they were when they wrote such and such song about this girl. For me, it’s almost the opposite. I generally don’t sit down and try to write a song. You can be going about your day and all of a sudden an idea pops in your head or your falling asleep and this riff pops in your head. You get up and sing it in your phone so you won’t forget it the next morning. The original spark from me usually comes from nowhere. The inspiration usually finds me and then it builds from there.

This is the final tour of the year for Powerman 5000. What are your immediate plans?

Yeah, we are super-busy right now with a couple of things. The band has already started writing music for the next record. We feel really inspired by the last album and the direction the band has gone back to, in a lot of ways, which is more of an electronic-metal sound. We are also going to do a side thing where we do some cover songs as well. I don’t know if it will be an album or what.

Cover album? That’s awesome because you guys did an amazing job with ‘Relax.’

We got approached by a record label called Cleopatra about doing this and it sounded like such a fun thing to do. When you get to do someone else’s song, you learn a lot about songwriting. We haven’t decided on what songs, but it seems like it’s leaning toward the ’80s. Probably have some Devo, The Clash and put the Powerman-spin on it.

I hear you can officially add television producer to your long list of titles...

Yeah man. I have been working on this TV show idea for years called ‘Death Valley.’ It’s a horror comedy cop show in the San Fernando Valley and they chase vampires and werewolves. It was finally sold to MTV and we will have 12 episodes. It goes in production as soon as I get off tour and we will start shooting in December.

How important is it to put on an energetic show?

For me, personally, it’s everything. I love writing songs and making albums, but I always feel like a band lives and dies based on its live show. There is a reason why we (Powerman 5000) have a reputation as a strong live band because we take it very seriously. If I have an off night, I won’t rest until the next show. It’s totally unique and different every night. I honestly try to create a vibe where we’re all here for a reason. There is a reason why you got off your couch and I got on the bus and came to Beaumont. However many people, we are here for a fucking reason, so let’s make it count. It’s always been the most important reason being in a band.