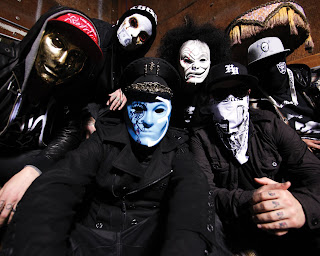 Hollywood Undead is headlining Revolt Tour 2011 along with 10 Years, Drive A and New Medicine. The show played House of Blues in Houston on May 10 and the boys from Los Angeles killed the set, which they opened with the hit single "Undead" from their 2008 debut Swan Songs.

HU is touring in support of their new album, American Tragedy. 88MW caught up with J-Dog a week or so before the show in Houston.

How is the Revolt Tour going?

It's going good. We actually took a day off in LA, so that was fun. We are all from LA and we were passing through so we said ‘fuck it let’s take the day off here.’ It was a little slow at first because we haven’t toured in like 18 months. Some of the kids didn't know we were touring, but it has picked up.

Any pressure heading into the recording of 'American Tragedy' because of the success of the first record?

Any band that has success on their first record, seems like you have to work harder on your second. You have to squeeze a lot of likes into the album, including your own, without changing too much. We have a lot of creativity in this band. This album, everyone wrote what they wanted to.

You have a favorite track on the album?

I like ‘I Don't Wanna Die.’ It’s dark and melodic.

Love the video to ‘Been to Hell,’ which is the second single off the album. We go to the Adult Entertainment Expo in Las Vegas every year. So my question is, how did you guys manage to get Peter North for a cameo in the video?

Did you ever imagine HU would be this successful?

All of us in this band wanted to do this but none of us thought it would have come as far as it has. Every band can hopefully hope for that but it comes when you least expect it. I don’t think any of us could do anything else.

Was it tough to get the record deal?

They actually came to us. We were having fun making music and putting it on the Internet. We were just fucking around in LA putting stickers everywhere and never realized we were going to get signed. It was surprising.

You have starting a clothing line called Dead Cultoure.

We have lot of down time on the road. It’s something creative to do.

What music are you listening to now?

Anything coming up after the Revolt Tour?

Going to Europe for a little bit then coming back and do a summer tour.