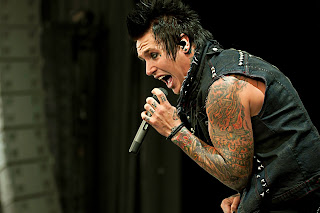 The music industry is one of constant change. One thing is for certain though — Papa Roach is a mainstay in the rock world.

The rockers from Sacramento celebrated 10 years of greatness last September with the release Time for Annihilation, which is a 14-track disc with five new songs and nine live recordings of some of their best hits like “Getting Away with Murder,” “...To Be Loved,” “Lifeline,” “Scars” and “Last Resort.”

For those living under rocks, P-Roach formed in the early 90s and hit the mountaintop in 2000 by releasing their second album, first on a major label, called Infest. Thanks to the hits “Last Resort,” “Broken Home” and “Between Angels and Insects,” the album went on to reach triple-platinum status and the band earned a Grammy nomination for Best New Artist. The instant success also earned P-Roach spots on tours like OzzFest and Vans Warped Tour.

Three more albums, Lovehatetragedy (2002), Getting Away with Murder (2004) and The Paramour Sessions (2006) meant more good music. The latter produced the single “...To Be Loved,” which was used by the WWE as the theme song to their popular weekly television show Raw.

Metamorphosis hit the shelves in 2009 and gave the band their second No. 1 hit, “Lifeline.”

Despite the success, the band has partnered with WhyHunger, a national non-profit organization founded in 1975 by the late Harry Chapin & current Executive Director Bill Ayres that works to put an end to hunger suffered by 49 million Americans.

We spoke with frontman Jacoby Shaddix spoke via telephone from his home in Sacramento a few weeks ago before the band began their latest stint on the road.

Of all the accomplishments, what are you most proud of?

I am proud of several — the music we have created and our live shows. That’s what it comes down to. Also, the brother hood amongst the band is awesome.The P-Roach live shows are amazing. We have always been a very energetic live rock band. Over the years, it’s turned from me trying to destroy myself on stage to a celebration of fucking rock and roll with the crowd. It’s a great mix of the sound, music, energy and the crowd.

Do you ever go back and listen to your earlier stuff?

That’s a crazy question because last night, we were actually listening to some old P-Roach and old music we were listening to back in the day like Wu-Tang Clan. We have a studio here in our hometown of Sacramento and we’ve been hanging out here kicking it old school and reconnecting with our old friends. It’s looking back at the history of the band and enjoying it. It’s a trip.

How did the band come together?

I was at a Deftones show way back in the early 90s and I remember flipping the fuck out during the show. I got in the moshpit and tore it up. It was then I knew what I wanted to do be in a rock band. I went to the show with our original drummer, Dave (Buckner), and after the show, I said let’s start a band. So we did.

What led you to affiliate yourself with the WhyHunger non-profit organization?

For me, it’s a great way to give back to our fellow citizens. The first year of my families’ life, we were homeless. To be where I’m at and receive the gifts we’ve received, we are very fortunate as musicians and it’s important to be a part of a cause that is bigger than ourselves and not just in music, but something else. WhyHunger is the organization we choose to affiliate ourselves with because people talk alot about supporting the troops, but alot of the homeless people in this country are war veterans. My biological father, who is a Vietnam veteran, is actually homeless. I tried to help him out, he didn’t want it, so I try to help others out. There is a homeless guy who runs around the neighborhood and I hire him for all kinds of stuff. He’s a real good dude.

The last record, ‘Time for Annihilation,’ was a mix of some new songs and live recordings of older music. What was the idea behind that?

I think it’ a rad way to celebrate 10 years of Papa Roach. Our mission was to prove we are one of the most kickass live rock and roll bands around. We realized our fans really appreciated the live stuff. It’s a look back along with some new tunes.

That album was released on Eleven Seven Music, which is a label with great rock bands. Has it been a positive move?

It was a breath of fresh air. It was nice to be amongst people who see eye to eye with our creative vision — what we want to do and execute it all the way from beginning to end. There’s good energy with these guys and the fans will start noticing it more when we start releasing more music with Eleven Seven.

I know you love hip-hop, so if you could team up with a rapper, who would it be?

Eminem. Hands down. He slays, man. I love the way he lays it down lyrically. He is one of those guys who is a master at his craft. We toured with him years ago and it was way cool.

How many tattoos do you have and what was your first one?

I got my first tattoo 16 years ago and it was my wife’s name, Kelly. I have what you call in the tattoo biz a long sleeve shirt — my ribs, back and chest are covered. I have a bunch.

Papa Roach is performing a sold out show at Warehouse Live in Houston on Tuesday, May 31. The Raid the Nation Tour also features The Hunger and Pop Evil.