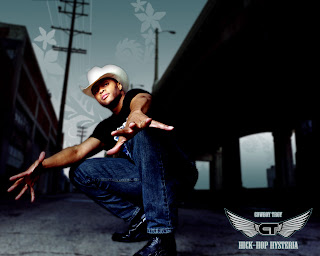 He describes it as lightning bolts shooting out of his fingertips and fire coming out of his eye sockets. No, not Godzilla, but the one and only Cowboy Troy who brings his high-energy “hick-hop” attitude to the stage.

“It’s a fun, energetic, rocking show,” he said. “You won’t sit around and be bored with it. It’s lots of fun.”

Born Troy Coleman in Victoria, Texas, most of the world knows him as Cowboy Troy. He first high-stepped onto the scene with the country duo, Big & Rich.

“I met John Rice in 1993 in a bar in Dallas that he was playing in and we became friends,” he said. “After they got a record deal with Warner Brothers, they invited me to be a part of their album and they asked me to go on tour with them, and I was like, yeah.”

But the 6-foot-5, larger than life country-rapping African American cowboy is more than meets the eye. He’s highly educated, graduating from the University of Texas with a bachelor’s degree in Psychology, and a married father who parents triplets.

So how did Troy get his start? I’m so glad you asked.

After being raised in Dallas and graduating from Skyline High School, Troy went to college in Austin. That’s when he found his musical talent.

“My freshman year, I was sitting around the dorm room with roommates watching rap videos and I started saying ‘I can do that, I can do that.’ After we returned from our Christmas break, we had a competition which I won, and I started doing it at bars, clubs and frat parties.”

Troy claims that he listened to whatever his parents played on their radio but remembers liking Charlie Daniels, Jerry Reed, Kenny Rogers, Dolly Parton with some ZZ Top, Run DMC and Def Leppard.

While trying to make it big in the music industry, Troy worked odd jobs such as becoming a manager at Foot Locker. He self-released three albums on his own when Big & Rich literally took the country music world by storm in 2004, joining forces with them and Gretchen Wilson, another find by Big & Rich. The 38-year-old cowboy became only the second African American (Charlie Pride) to perform on the Country Music Association Awards (CMAs) when he rocked the stage with his new friends.

Troy was then signed to Raybaw/Warner Brothers and released two albums, Loco Motive and Black in the Saddle, producing radio hits including “I Play Chicken with the Train” and “Hick Chick.”

But it can be difficult for some to put their fingers on his style, or the new wave of country music out today.

“For artists to survive, they have to change with the taste of the consumer,” he said. “Look at anyone’s I-Pod. There’s not one genre of music on there. I’m listening to Avenge Sevenfold to Merle Haggard. The younger the audience gets the more you have to adapt. They like a little of everything.”

In the new sound’s defense, country music has changed each decade, explained Troy. “Country music in the 70s didn’t sound like old school country,” he said. “George Strait came around in the early 80s and brought that original sound back then in the 90s, Garth (Brooks) came out, and in my estimation, added country with a little pop rock in it.” Troy then pointed out that Brooks’ cover of “Shameless” was actually a Billy Joel song.

His knowledge, success and persona helped land him a gig as a co-host, with fellow musician Jewel, on the fifth season of Nashville Star, a talent search contest like American Idol. Troy said the show was great allowing people to realize there are other competition shows and other opportunities for different artists.

After performing at the 2008 Republican National Convention in St. Paul, Minn., Troy has done just about everything.

“I want to continue to make music,” he said. “I want to do more traditional country, more ‘hick-hop’ and do some more acting.”