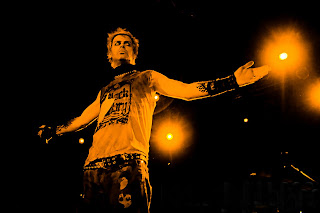 No one would have ever imagined that two brothers from a small town in northern Massachusetts would bring the music and film world to its knees. Most know the story of Rob Zombie, from his movies, House of 1000 Corpses and the awesome remake of Halloween to his music with White Zombie. But some may not know his younger brother influenced and changed the rock music world with his own likings.

“What’s funny is I was starting bands before he (Rob) wanted to be in music,” said Spider One of his older brother.

“This all started because there was nothing to do where we grew up with no record stores, no movie theaters and having to find something to do from being fuckinging miserable. I dove into pop culture shit as a kid watching about 10 hours of television a day, collecting comic books, then I discovered this little thing called punk rock.”

Spider One, whose real name is Michael Cummings, said he loved bands like the Ramones and the Clash, which helped him open his eyes to music. He would never look at it the same again.

“It was something I could understand and do. It wasn’t about me being the greatest singer in the world, it was more about attitude and idea and over the years I brought my love of aggressive music and the love of movies, comics and TV to make this hybrid of Powerman 5000.”

He says the name of the band was inspired by — go figure — a comic book character.

“I had this one comic book called ‘Powerman,’ who was the first black super hero,” he said. “I was really attracted to it and added 5000 for the flair.”

There’s not a specific or correct way to describe PM5K music. Energetic, rocking beats, with some guitar riffs added with a mix of synthesizers is a start. Some critics claim this band was ahead of its time as Spider One began this process in 1991.

“It’s funny you say that because I hear that a lot,” he said. “I never wanted to claim that, but we tend to do things and people are playing catch up. It’s like hard core with that hip-hop sensibility long before anyone had heard of nu-metal. I like the fact that those nerdy-geeky things that I liked and people laughed at have now become embraced,” proclaimed Spider. “Suddenly it’s all cool. Batman being nominated for Academy Awards and shit.”

He said this all started at an early age as he watched inappropriate content before he was supposed to. For an example, Spider claims before the age of 10, he had already watched the Stanley Kubrick movie A Clockwork Orange.

But it wasn’t all fun and games for this pop culture genius. His first record deal with Dreamworks appeared to be a good one as their second album Tonight the Stars Revolt! sold over a million records mainly in part to the success of the single “When Worlds Collide,” but a third album was cancelled by the label.

“It was disheartening,” he said. “We found a good home and sold them a million records and all of a sudden it was gone. We had the mindset that you were worth something if you were signed on a major (label), which is now not even the case.”

After taking nearly a year off, he began to question himself and his intentions but his ‘batphone’ began to ring.

“Video game makers were calling and asking for music and the lightbulb went off and I said, ‘wait, the worth of the band is not what label we are signed to but the worth is the band. So we slowly got back into the groove of things and did some small tours and lowkey stuff. It’s not going to be like before because now the top selling album of the year drops about 2 million, gone are the 15 million sellers,” he stated. “It’s not about that for me. It’s not about fucking Walmart and pleasing everybody. This is about looking at those people who like the band and get it and makes them happy.”

After recording another album, Spider One still wasn’t satisfied. He explained this last album Destroy What You Enjoy, he drifted away from what originally made the group, adding more punk rock to the record.

“It left the fans scratching their heads but more recently I found the love for those things that inspired me so the new album we are currently working on will give the fans what they love and expect from us — heavy rich mixed with weird psycho electronics with a lot of obscure movie references. It’s fun to get back to how we started.”

PM5K hasn’t set a name for the new record but they have put a single titled “Super Villain” on their Myspace page and it’s taken on a life of its own.

“People complain about the record industry going down the tubes and no way for bands to make it anymore. It’s easy to cry but you also see incredible benefits from it. The power is in the hands of the bands. If you are doing good shit, fans will support you and we are seeing that first hand.”

They toured on Ozzfest among other super tours and they continue that aspect today.

“There’s something about this business,” he laughed. “It’s very difficult to stop. As long as people respond to it, I will keep doing it.”

Spider One explains some credit belongs to the Internet.

“It’s a massive culture, man” he said. “There’s the 35 year olds who watched us at Ozzfest and now I see 12-yearold kids in the crowd. I ask these little kids how do you know about us and they say ‘well, I was surfing the Web and found you guys and I think ya’ll are badass.’ It’s not old versus the new anymore. We are all on even ground.”