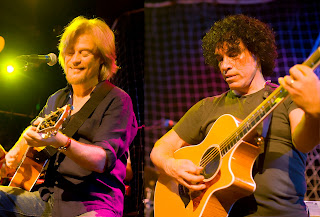 There’s not much that hasn’t already been written about the most successful music duo in rock history — Daryl Hall and John Oates.

The two actually met in 1967 when they both ran for cover in an elevator to escape gunfire by gangs in Philadelphia. A mere 42 years later, Hall and Oates continue to record and tour behind their patented blue-eyed soul sound.

Inducted into the Rock and Roll Hall of Fame in 2008, the duo shows no signs of stopping. We caught up with John Oates via telephone from Aspen, Colo., where he was taping a television program.

What’s the secret to your success?
Real simple. Write a better song and get a better record contract. It was incremental goals and that’s how we really approached it and believe it or not, that’s how we still approach it today. The fame and success was a byproduct of working hard and what we did.

It took nearly four albums to get that first hit. Any frustration?
When you are young, you want everything to happen yesterday. We were there mentally but by the same token, it was a blessing in disguise that we didn’t have success right out of the box. The first three albums were distinctively different; Whole Oats (folk, singer/songwriter), Abandoned (acoustic), War Babies was a full rock album. The Silver Album was kind of like a collaboration of all three. That was the first time our sound became identifiable. We took over production of our own music and that’s when everything changed and we began to hit our stride. The decade of the 70s was preparing us for the 80s.

Why did you decide to cover “You’ve Lost That Loving Feeling” by the Righteous Brothers?
It was an after thought. After we thought the Voices album was done, we had a listening party. Back then after you made an album, you had a get-together for the record company with friends and family. You debut the album to get them jazzed up a bit. We did that and sat back and felt something was missing. It was a great album but one element was missing. We didn’t know what element but knew there should be one more song. After the party, we went to eat at a local restaurant and that song came on in the diner. We looked at each other and thought wow, that’s it. Went back to the studio and played and recorded it and finished it in one day.

The song “Every time You Go Away” was a hit single by Paul Young yet you guys wrote it. Any regrets?
Not at all. If you listen to our original, it’s like an old stack of R&B songs and that’s how we heard that song, in that style. We pay homage to our roots and that was important to us. They heard it as a pop song and it became a huge hit for him. The song was so good you could do it anyway you want.

Were you surprised “Maneater” was your biggest radio hit?
We had a good feeling about that one. We both were notoriously bad at picking hit singles but that one just jumped out. It captures a mood, musically and lyrically, of New York City in the 80s. Lean, sparse, edgy, new wave meets pop. It was perfectly suited for the time.

Was it weird that “Say It Isn’t So” came out at the same time Paul McCartney & Michael Jackson released “Say, Say, Say”?
The deejays had fun with it. Interesting story on this song was the dance version of this song became a No. 1 record. That was in the beginning of the club mixes. Producers were taking songs and turning them into club and dance mixes. That was the first one of ours that was mixed. ‘Out of Touch’ was also a big dance remix hit; so was ‘I Can’t Go for That.’

You are into auto racing. Why so?
As a little kid, I was a race fan. My friend’s dad ran a hot dog stand at a local dirt racetrack that I used to go to in the 50s. I saw Mario Andretti and his twin brother Aldo, race jalopies. Back in the late 70s, I was making a little money and I went to the Hampton’s and saw a little track there and began doing some racing. I took driving schools in England and here in the U.S. and began doing amateur races, Formula 4, sports cars, then Endurance Series in the 80s. I did Daytona (24 hours), and began some professionally, but I never considered dropping music. I still enjoy it and take my son out there and go to NASCAR and Indy.

Jon Stewart asked you to be on his show to make fun of Alan Colmes of Hannity and Colmes. How’d that come about?
Well, they called us when Colmes was leaving the Hannity and Colmes show on Fox News and they wanted to do a tribute so we did a spoof of ‘She’s Gone.’ We are big fans of Stewart and I didn’t realize how much work he puts in to it. He’s there at 8 a.m., writes all day and then he directs the show.

Plenty of rap/hip-hop groups sample your songs. You down with that?
Oh yeah, it’s cool. It goes back to songwriting that has a timeless quality to the songs. They still work and reach people. Part of it is the groove, part of it is the hook. We look at it kind of as a tribute.

What’s your take on the music industry today?
I don’t think very much of it. I am happy to see the old business dying. It will now give the artists the opportunity to be creative and do whatever they want. The Internet is both a blessing and curse.

So what’s left for Hall and Oates?
We represent a lifetime of music. We have legacy and a fan base and a lot of people we feel responsible to, to uphold the hard work and the years we put in. I am doing some independent stuff. I have a solo project called ‘Story Behind the Songs.’ It is a songwriter series. I taped it live in Aspen (Colorado). I want to nurture young songwriters. I enjoy that process and that’s very important to me. For me, it’s all about creativity. It’s about songwriting. I am more appreciative of the art and craft of songwriting as I’ve gotten older. We made good records but the reality of it was the songs. Now my goal is to write songs that are meaningful.