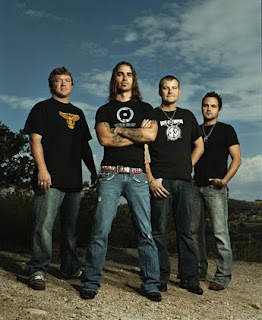 There’s no true description of the music of Cross Canadian Ragweed — a four-piece
band from Stillwater, Okla.

“It’s something a little bit different,” said drummer Randy Ragsdale. “It’s not force fed to you and people really like it. It’s honest music and everyone seems to relate to. You can’t drive from New York to LA and keep hearing it on the radio. It makes it a little more unique.”

Some say Southern Rock, Alternative Country,Texas Country or even Red Dirt. Well, that’s the name the band has given it themselves. “Red Dirt is where you’re from,” said Ragsdale. “We are from Oklahoma so we call it red dirt.”

The true fans (and there’s plenty) of CCR — no, not that CCR — know what to call it and they’ll get a chance to get up close and personal at Whiskey River.

The band began playing in 1994 and was signed by Universal South, a major record label in Nashville, and have since released four albums. Their second, Soul Gravy, debuted at No. 4 on the Billboard Country charts in 2004 then went on to sell over 250,000 units. The band’s non-stop touring from arenas to small clubs has helped them to continue to draw record crowds wherever Ragsdale (drummer), Cody Canada (lead vocals/lead guitar), Grady Cross (rhythm guitar) and Jeremy Plato (bass) park their tour bus.

CCR grossed $2.5 million in 2004 playing 250 dates and haven’t slowed down since. They set a record at Lone Star Park near Dallas drawing more than 25,000 fans for a show, breaking a record previously set by none other than Willie Nelson.

Is it the music that keeps packing the fans in?

“We don’t ever go into the studio and make music we can’t reproduce,” said Ragsdale. “If
we can’t do it live, then we won’t record it. We are better at a live show then in the studio. We’d rather get the music out in a live show and if we could capture that, rather than being in the studio, it would be great.”

Ragsdale went on to explain he loves touring and enjoys the frills of both arenas and small venues but enjoys the closeness of their fans. “It’s cool to play arenas but you lose intimacy,” he said. “You can’t feed off that. In a bar, if you are not there for the music then there’s no reason to be there. I like both but there’s something about being able to see all the faces.”

From crowd pleasing hits such as “Boys from Oklahoma,” “Sick and Tired” and “Anywhere
but Here,” Ragsdale says his current favorite to perform is “Numbers.”

“It changes from time to time but that one is pretty fun to play,” he said. “There’s no rules on that song when you play it live. You get lost in it.”

CCR released the album Mission California last year and according to Ragsdale, will return to the studio in the spring. “We pretty much are halfway there,” he said. “We have more stuff now than what we normally do and we still have time left to write.”