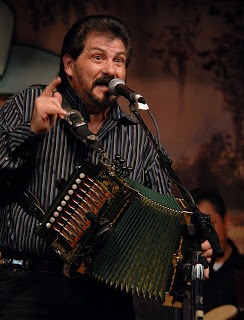 Nowadays, it seems you can find a Cajun or Zydeco band on every street corner but none can rival the acknowledged King of Cajun, Jo-El Sonnier.

Born and raised in nearby Rayne, La. - the "Bullfrog Capital of the World" - the 63 year old put the accordion on the map after mastering it when it was set in his lap at the tender age of 2.

"It's just a natural fit," he said. "They started bringing me to their favorite clubs back then to listen to the music, man it was a lot of them, so I got to hear a bunch of French, swamp pop and country. I had a chance to have a taste of it all. That was very influential."

Unlike most in his genre of music, Sonnier found national success that led him to major record deals and two top 10 songs - No More One More Time and Tear Stained Letter.

Songwriters Troy Seals and Dave Kirby gave Sonnier No More One More Time as a demo, which he sat on for awhile.

"I was out in California in 1987 then signed with RCA Records and went into the studio and recorded," said Sonnier. "It was a great testimonial song. The next thing you know, I was opening for Alabama, Lee Greenwood and Charlie Daniels."

It was just a short year later when Sonnier hit it big with Tear Stained Letter, a song written and originally performed by British singer Richard Thompson.

"Richard released that song in Canada and sent it to me and I listened to it," he said. "I had to find a way to make that song commercial for country radio. Back then, country music was steel, fiddles, drums and lead guitars so it was a challenge to put the accordion up front. I brought in a few people like Kenny Greenberg for that song and he brought the licks to the table. I loved Chuck Berry so we took the ideas out of my head and Kenny and I got after it. We used everything on that record that people thought you couldn't get away with. And we did."

The song reached No. 8 on the charts and country music had never seen anything like it. "That song was a first of its kind," he said. "It was the cutting edge. I think I was a part of the gateway that opened the door for that kind of music in country."

According to music and radio trade publications, Tear Stained Letter became the No. 1 alternative country song.

Sonnier's roots go back to the days of playing radio shows early in the morning before heading off to school. He was playing in bars, clubs and lounges before the age of 10 and word spread about how good this boy could play the accordion. They then told him to go play at the radio stations.

"My father would drive to me to the radio station down in Crowley," he said. "We were sharecroppers, got up real early and would play for about 15 or 20 minutes then walk across the street and I'd have a doughnut and he would have his coffee. We shared something very special and then he'd drive me to school."

The accordion was a European invention back in the early 1800s and began appearing in popular music during the 1920s but not many can master the boxed-instrument, considered more difficult than a guitar, drums, or trumpet.

"I enjoyed playing the accordion because it made people feel good," he said. "I loved the quality of the sound. It took me to a special place when I was a boy plus I loved the Cajun flavor of the music. I saw that it brought joy and happiness to other people when I played so I wanted to take it to a higher place by bringing in some Cajun, country, blues, rock and jazz. I like it all so I play it with that kind of flavor. I guess that's why they call me the "Americana Cajun.'"

From picking cotton as a kid, playing at radio stations, going to school, and playing music at clubs, lounges, behind bars and anywhere he could find, he used his instrument as texture.
He started with a French flavor then would play Fats Domino or whatever song was on the radio.

"Music is like medicine," he said. "If you can make someone smile with a song or two, it's good. Whether you come to my show or someone else's, it will make you feel good while you are there. My mom always said music was like medicine. It can calm your nerves or crank you up."

Sonnier has played in 49 states, 18 different countries and played with over 70 superstars but he claims none were like Johnny Cash.

"Johnny opened the door for me," he said. "He gave me chance to come in with that French accordion and do some songs with him. He could have played all those instruments but he let me come in and do it."

Sonnier met the man in black in 1978 and played the accordion on the song Cajun Born on Cash's album Gone Girl. He also played harmonica on No Expectations.

"He was a purest," said Sonnier of Cash. "He cared about his fellow people that stood next to him and understood him. It's all about passion and respect. That's something that every artist should strive for."

Sonnier's music can still be heard on Sirius/XM satellite radio and clubs throughout the country but as much success - including two Grammy nominations - that Sonnier has had, he remains grounded.

"I want to thank everyone who still plays my music and even thank you for doing this interview," he said. "It's been quite a while since someone wanted to interview me. This is my job, my living and I'm grateful I can still do it. I love to perform and continue to follow my dream and provide entertainment to the fans. The sun is still shining for me. There's so much talent out there, but to see the fans still enjoy it, it makes me feel good. It's a miracle each day with so many artists out there and that's what I want my fans to remember my by - I brought the best that I could and hope they understood that."

There was one Elvis, one Willie, one Johnny - and there will only be one Jo-El.