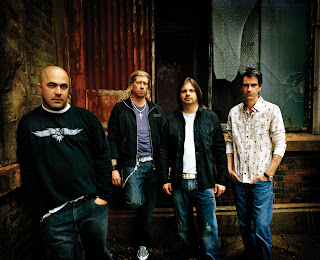 Fame, fortune, world tours, 15 million records sold, four No. 1 hits and multiple appearances on the Howard Stern Show — just a few highlights on the resume of Staind. Nearly 13 years to the day, and six albums later, the four-piece rock band from Massachusetts continues rolling along without a True Hollywood Story or Behind the Music hitch in their step. Their career has yet to be marred with keeping band members out of jail or dealing with other sorts of drama.

“There’s always drama,” laughed guitarist Mike Mushok. “But we’ve been fortunate. Part of that comes from certain people putting themselves in that situation. Does Britney Spears really need to live in Los Angeles? That’s never what any of us wanted. We all love playing music and still live in New England. Could we have? Yes, but that’s not us.”

If there’s no made-for-television Staind movie, who are they? Is it the lyrics? Lead singer Aaron Lewis’ vocals? Edgy riffs?

It all started when the band self-released their first album, Tormented, in 1996 then opened for Limp Bizkit, who was the hottest act on the market at the time. Front man Fred Durst wasn’t happy with their album cover and didn’t want them to play.

“It was a collage of pretty gruesome looking pictures,” said Mushok. “It was more a shock value to grab people’s attention and it worked.”

It wasn’t long after that when Staind emerged into the mainstream when Durst joined the band onstage for a live performance of “Outside” on the Family Values Tour in Biloxi, Miss.

Their second album Dysfunction was already double-platinum and the “Outside” video became an instant classic on MTV by the time the group began recording their third album, Break the Cycle. That album produced their second No. 1 single, “It’s Been Awhile,” which stayed atop the modern rock and mainstream rock charts for a combined 30 weeks.

“The single ‘Outside’ blew up as we were recording Break the Cycle,” said Mushok. “We redid that song as it blew up, which led into ‘It’s Been Awhile.’ The first time we played it as a band, we looked at each other and knew it was going to be special. We’ve had that feeling before with other songs that didn’t do as good but you’re not always right with that. But that was a special one.”

Their next album, Chapter V, came in August 2005 and of course was another certified platinum record thanks in large part to the first single “Right Here.” That’s when they met Stern.

“First off, I’m a big Howard fan and have Sirius throughout my house,” he said. “We have been on the cover of ‘Rolling Stone,’ had a No. 1 record but until you are on the Stern Show, you haven’t really made it. We’ve done the show several times but when you do Howard, there’s always a twist. We aren’t like Kid Rock — we can’t go on there to talk about all the chicks we’ve banged or fights you’ve had — we are not that band. Most of us are married and pretty low-key.”

So what was the twist? After playing a few acoustic songs, the group had remade a song for one of the Stern characters, Beetlejuice, entitled “This is Beetle.” Mushok wrote the music and Lewis put his twist on the melody.

With a greatest hits album thrown in the mix that leads fans to Staind’s sixth album, The Illusion of Progress, which hit shelves in August and Mushok claims is their best to date.

“If you never think the album you are putting out is your best record, then you are probably not done with it,” he said. “So yes, I believe it’s our best. There’s something about the songs on this record that gives me that same feeling from ‘It’s Been Awhile.’ It’s more experimental. More musical.”

Plus Mushok shows off more with plenty of guitar solos. The first single, “Believe,” is currently No. 9 on the modern rock charts and No. 12 in mainstream making Staind a single’s machine.

“We try to write good songs,” he said. “We want people ten years from now to still listen and appreciate it as a good song. That’s what it’s about to me.”

A group that has accomplished so much and kept it together for so long must be at the end of the tunnel and ready to relax.

“You have to talk about (the future),” said Mushok. “We will keep touring but Aaron wants to put out a (solo) record so I expect to do one more album. We will head over to Europe and Iraq in early 2009 then back to the U.S.”

But there is a life outside of music, a sense of normalcy.

“I love playing but I love being home,” said the father of a 2-year-old set of twins. “I’ve been married for six years (together for 14) and I never knew how hard it would be to leave my family and go on the road.”

After tuning his last guitar, Mushok, who loves to write music, would like to do some music for a movie soundtrack but reiterates his likeness for his current job.

“It’s always been a dream of mine to make a living playing my own music and to achieve that in this day and age still putting out records, it makes me feel real thankful.”