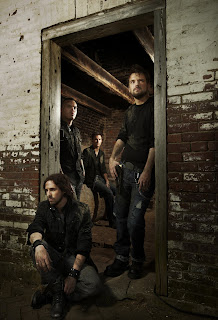 Jesse Hasek is the frontman with the popular rock band 10 Years, but Hasek hasn't been there since the band's inception a decade ago in Knoxville, Tenn. He was a mere fan.

"They started in 1999 and it was probably a year later when I began going to their shows and became a real big fan," said Hasek. "I would pass out flyers to promote the band I was in and I kept asking them to come check us out."

It was perfect timing for Hasek and 10 Years. The group had lost their original lead singer, Andy Parks, who left to pursue other ventures, and the band asked Hasek to join them.

"They wanted to go a little more melodic with the vocals," he said. "I was blown away."
Maybe it was Hasek's excitement and love for 10 Years that helped them blow away listeners.

Their major label debut on Republic/Universal, The Autumn Effect, came in 2005 and it soared in popularity with the hit singles "Through the Iris" and "Wasteland," which stayed on the rock charts for more than a year and finally hit No. 1.

"It was very surreal," said Hasek. "We were on tour in a van with a trailer and we planned on doing that for a while. We were at a mall on a day off when our manager called and told us the news about "Wasteland.' We finally got to upgrade from a van to a bus and it was then it became a reality we could do this as a career. You never can predict how long and how far a song is going to go."

10 Years began monster tours with the likes of Distrubred, Ill Nino, Breaking Benjamin and Sevendust. "Bands are like athletes," he explained. "You watch how others perform, especially on stage, to see how they work together."

But it wasn't just their home soil where 10 Years had turned heads. The foreign audience overseas was anxiously awaiting their arrival.

"The language barrier was a little weird between songs but it is amazing the dedication they have," said Hasek. "In Japan, the fans are hungry and not overexposed to rock bands. The second time we went to Japan there were a group of fans awaiting our arrival at the airport."

On show days, Hasek said they show up as soon as the doors would open. "Over here, its a trickle effect as most fans show up to a concert just to catch the headliner but the fans in Japan are waiting for the doors to open. Once they are inside, they set all their possessions around the edge of the club and no one messes with them. It was a uniform, like a system. It was amazing to watch."

The band returned to the states to record their second album and released Division in 2008. The first two singles, "Beautiful" and "So Long, Goodbye," charted but were ballads and not a correct representation of the album, claimed Hasek.

"We didn't get to choose the first two songs and those don't represent the record the way we wanted them to because the album is dynamic and the fans who know "The Autumn Effect' know we are a rock band," he said.

Hasek and his bandmates got their wish with the release of their third single, "Action and Motives," which is by far the better of the three singles.

"Those two songs are the softest on the album," he said. "We felt like we needed to get something out like "Actions and Motives.'"

So how does 10 Years separate themselves from the rest of the music world?

"We teter on the line between mainstream and underground," he said. "The reason being we are really good at being us. We aren't the type of band to follow the trends and chase after we see what is successful. We do it from the bottom of the heart and make something that can be crossed over to the mainstream. By doing that, we get loyal fans."

Some of his fans may not know he was once a ghost hunter.

"I was raised in church my whole life," he said. "I love to question the answer and lots of people just believe what they are told their entire life so I was interested."

Hasek and a friend went to Louisville, Ky., to participate in Terror in Louisville. "We went to a place called The Waverly Hills Sanatorium. People come from all over the world to this place. It's an old hospital where a lot of patients with tuberculosis died in the early 1900s. It's supposed to be haunted."

Hasek said the first night they were bored and were joking around making fun of the place but he became a believer the next night.

"I really thought it was bullcrap," he said. "I was in a room and one of those old triangle door wedges wizzed by my head (with no one in the room) and you could hear it on camera. It was unexplainable."