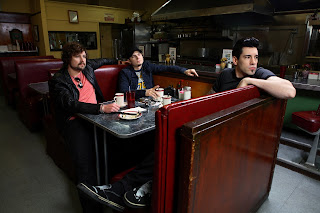 Lead singer Tyler Connally said it was purely “awesome” that his band’s hit record “Bad Girlfriend” was blowing up the radio airwaves across the country.

According to Radio and Records trade magazine, the song that was once No. 1 has been in the top 25 for 21 consecutive weeks and currently sits No. 2 on the Active Rock charts, getting more than 1,600 spins per week behind Metallica’s “The Day That Never Comes.”

Connally said the group originated in British Columbia, Canada, then roared onto the scene back in 2002 after he handed Chad Kroeger, the lead singer of Nickelback, a demo after a concert. Kroeger, who had created his own record label with Roadrunner Records called 604, signed the band but they needed a band name.

“We recorded a song called ‘Theory of a Deadman’ and we changed the name of that song,” said Connally. “We got signed by the label and needed a name so we picked Theory of a Deadman. Back then we were a lot younger and our music was a little harder so the name was cool and it stuck.”

The name may be a little unusual but “Bad Girlfriend” isn’t. Off the band’s third album, Scars & Souvenirs, the single can be heard frequently on Big Dog 106, cell phone ringtones and thousands of Myspace pages but this isn’t their first rodeo. Often referred to as TOADM, the band has had success with other singles including active rock top 10 hits “Nothing Could Come Between Us,” “No Surprise” and “So Happy.”

Several of TOADM’s songs have been featured on video games such as American Chopper, NASCAR 09 plus the band performed “Deadly Game” live at WWE’s No Way Out pay-per-view in 2006 and later recorded “No Chance In Hell,” the theme song for WWE owner Vince McMahon, and the song landed on WWE The Music, Vol. 8. Connally added that getting hooked up with the WWE was a great opportunity because wrestling is huge.

“Jim Johnston heads up all the music at the WWE and he happens to be a big fan of ours and the rest is history,” he said.

To add to their popularity, TOADM will return to their native country and perform at halftime of the 96th Grey Cup in late November, which is the Canadian Football League’s version of the NFL’s Super Bowl.

“Now that’s pretty awesome,” said Connally. “So we are already thinking about a wardrobe malfunction.”

Recording hit records and gaining popularity are one thing, but how does it translate into their live gigs?

“We’ve been told that our live shows are very comparable to the CD,” said Conally. “We just get on stage and push play on the tape and just dance around,” he added with a laugh.

“Just kidding, Hannah Montana. No, really, it’s a great compliment to our sound guy but it’s more dynamic,” he said, then attempted to describe their live shows. “We do a lot of crowd participation. We like to rock out and move around. We’ve been on tour for a long time now and opened for a bunch of big acts, so it was our job to get the crowd going and motivated. We were new and people were like ‘Theory of a what?’ so we had to do a lot to get these people’s attention and we’ve learned a lot and we just carry that over to our headlining set.”