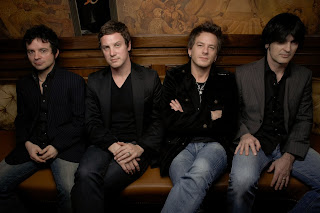 It became known as the "Seattle Sound" after the success of Nirvana and Pearl Jam launched a record label talent search in the Pacific Northwest that triggered a rock music revival in the early "90s. For a city mostly known for daily rain showers, Seattle helped change the face of the music industry in just a few short years, producing hit bands Soundgarden and Alice in Chains, plus lesser-known but influential acts including Mother Love Bone and Mudhoney. Of the hundreds of musicians playing in the dozens of bands that have called that city home, only one remains intact with the original players - Candlebox.

"It's really hard to explain," said guitarist Peter Klett. "It's a cliche, but I call it the golden years. When I look back on it, it's like a warm glow."

Klett explained there was something to do every night in his hometown. "It was a constant feeling of sight and discovery," he explained. "I feel fortunate to be a part of something that was so substantial, like in San Francisco in the 1960s. It's the same thing and I got to live through it. It wasn't like we moved here for it. We were all here playing music and just got lucky. The right place at the right time, but we were here long before that started. We got a bad rap about riding the wave but I've been playing music since I was 11 years old so I was ready for this."

Candlebox found success, as they all did, with their first release Candlebox in 1993. The album sold over 4 million copies, making them multi-platinum artists on their very first record. The pressure was on from day one as the group was the first success story on Maverick Records, a record company created by Madonna that also signed Alanis Morissette, Prodigy and The Deftones.

They never produced a No. 1 hit off their debut, but radio was very kind to such songs as "Change," "You," "Far Behind" and "Cover Me."

Candlebox then released their sophomore album, Lucy, which wasn't a slump as it sold 500,000 copies marking it a gold record.

Then came Happy Pills in 1998, which was probably too much too soon. The group then had major problems with the record label and decided to call it quits.

Klett then started his own band, Red Light Music, and also became the frontman, and lead singer Kevin Martin did his own thing with Kevin and the Hiwatts. There were no ill feelings towards each other. They just wanted to get away from under the umbrella of the big label.

Years later, 2006 to be exact, Rhino Records called up Kevin and asked if they wanted to do a greatest hits album. It was a no-brainer.

"It was new and exciting to play together again, to feel the energy," said Klett. "The first song we rehearsed was "Arrow,' and we finished the song with a big grin on our face so we knew then it was right."

After a short reunion tour in 2006, Candlebox headed back to the studio, this time under Silent Majority Group label.

"It didn't jive right away so we went back in the studio in 2007 and decided then we were ready to record and dropped the album in 2008 and hit the road that summer for three months."

Into the Sun was the first album in nearly 12 years, but the big question would be would their fans still dig the music and, more importantly, would radio be friendly like it was some 15 years ago?

"(The single) did pretty good on the charts and we have another song ready to be pushed, "A Kiss Before Dying,'" said Klett. "What I like about Candlebox is when you hear Kevin's voice and hear the style, you know its Candlebox. It's not, "Oh who is that?' You hear it and say, "Oh, that's Candlebox."

With radio ready to jump on board, the fans were also waiting.

"It's across the board," he said. "Our old hardcore fans are bringing their kids and a lot of people that discovered us after the split - those people are thanking us because they discovered Candlebox when we were broken up and didn't think they would ever get to see us live. It's cool as hell."

With everything clicking again, not much has changed.

"Well, we are more mature," said Klett. "We, of course, are older, but the writing and music changes. It becomes more refined. You venture into new styles. Doing different projects while broken up allowed us to explore different avenues we didn't back then due to record label expectations. We could do whatever we wanted."

Their immediate plans are to tour this summer and head back into the studio late fall or early next year.

In the meantime, you could catch Klett at a NASCAR race.

"I'm a big fan," he said. "I watched the first Daytona 500 then became a huge A.J. Foyt and Richard Petty fan. I lost track after the music career took off but after the band split, I watched Talladega and was hooked again instantly."

Klett said he follows Kasey Kahne (being a local boy from Washington), but also likes the underdogs. "As much as people hate Kyle Busch, I love him."