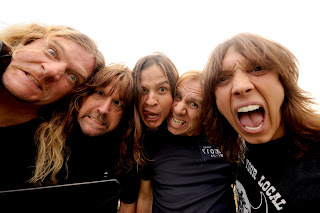 “Man, the love of music still drives this band,” said Keith. “We still have a blast doing it and it’s all about the fun.”

In 1994, the boys from Sacramento took a break because lead guitarist Tommy Skeoch, who is the lone member that didn’t return, had to deal with personal problems – namely, drug issues.

“We really didn’t want to break up in the first place,” said Keith. “It kind of just happened.”

Keith explained Tesla continued as a four-piece band and had hoped that Skeoch would join back up with his band mates and when that failed to occur, Tesla finally broke up in 1995.

“We then got back together thanks to a DJ in Sacramento named Pat Martin,” said Keith. “Me and Tommy were playing in another band at the time, but there still was a lot of animosity, but we were able to bury the hatchet.”

Tesla then recorded their fifth album, Into the Now, but soon after, Skeoch hit the brakes and left for the second and final time. The band continued on and replaced him with Dave Rude and Keith said they didn’t miss a beat.

After some touring in Europe, Tesla signed with an independent label and went back into the studio with producer Terry Thomas, who produced the band’s fourth album, Bust a Nut.

Keith said they wanted to bring Thomas back in because they felt they didn’t give him a fair shot.

“We were so out there with Bust a Nut we felt that wasn’t our best effort so we wanted to work with him again,” said Keith. “Everything we do now, we are clean and sober so things are tighter than ever.”

The new album also gave the rock legends a chance to get back to doing what they do best without all the corporate hassle.

“Unlike the big labels, every ounce of energy and every penny goes into the band,” said Keith. “You don’t sell as many records but it’s more satisfying. You are able to choose what you do opposed to fighting the label over the music if they don’t like what you do.”

For instance, Tesla’s only top 10 single they wrote was “Love Song,” but their label, Capital Records, didn’t want it released.

“They said it was just three great parts,” said Keith. “I said ‘what’s the format then, Conway Twitty?’ We fought for it and we won. Now we are able to put out what we want.”