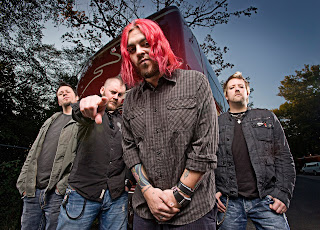 Most national bands are used to the cycle of writing, recording then touring, but none may be able to compare to the work ethic of Seether. Four albums and continuous touring from the states to Europe are some of the many reasons why this guitar-driven foursome has sold over 5 million records.

“On the road again” doesn’t begin to describe them. They are fresh off a tour supporting Staind – they just played Ford Arena in November — and now they are off to the United Kingdom for 10 days before returning to the United States to support 3 Doors Down. That show hits Ford Arena on Feb. 6 before Seether departs on a three month spot on the Nickelback tour.

So is there a burnout factor?

“You do the best you can,” said guitarist Troy McLawhorn, who is the newest member since joining the group a year ago in February.

“Don’t get me wrong, we get burned out, but we love what we do,” he said. “But if you do the same thing each day it gets old.”

So fans who just saw Seether in Beaumont will likely hear a new setlist when the band comes back through town.

“We change it up and play songs we haven’t played in awhile,” he said. “It makes for a good show by mixing things up.”

The original group was founded in 1999 by singer Shaun Morgan in Pretoria, Gauteng, South Africa and began playing small venues in Cape Town. Morgan is the lone original member of Seether, a band that was once named Saron Gas but changed its name when they signed a major record deal with Wind-Up Records. Apparently the original name sounded too much like the nerve agent sarin gas, a particularly nasty chemical weapon.

A native of Fayetteville, N.C., McLawhorn met Morgan in 2002 when his band, Still Rain, opened for Seether, who had just released their first record, Disclaimer, which had a single called “Broken,” where Morgan shared vocals with a guest artist — his then — girlfriend Amy Lee of Evanescence.

McLawhorn then joined a band called doubleDrive and they were once again reunited with Seether on the road and yes, it happened again. The guitarist joined up with Dark New Day in 2005 and supported Seether on another run.

“I got to be good friends with Amy (Lee) through Shaun,” said McLawhorn. “Evanescence needed a guitarist and drummer on quick notice and Amy called and asked and I went on to finish the tour with her. As we finished, I saw Shaun and he and Dale (Stewart, bass) asked if I was interested in playing with them and I said yes.”

McLawhorn has yet to be involved in the recording process with Seether, but that will soon change. According to him, once the band finishes the tour with Nickelback, they plan to shut themselves in and begin the new album process.

“My drive comes from satisfaction from creating to performing,” he said. “In the studio, you get to be really creative and do things that you can’t do live. Performances are the other side of the coin and you get to approach it in a different way. Throw that on top of the fact I love to travel, it makes for a great life.”