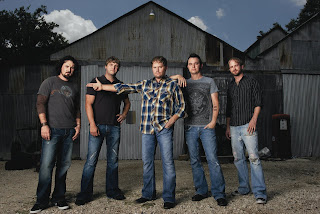 Rolling Stone magazine, the Billboard music charts and hundreds of clubs across the country dig the sound of the Randy Rogers Band. The 30-year-old Cleburne, Texas native has assembled a group of musicians and have taken the Country music scene by storm with six albums and constant non-stop touring that, in 2007, generated more than $2.5 million in revenue, which is a big number for a country group that is not on mainstream radio.

“Everyday I wake up, I get the feeling this is the best thing that has ever happened to me,” said Rogers. “As far as being on stage, there is no feeling like it. We love being on the road and this is what makes our living. We all care about our families and work as hard as we can to provide for them. We bring a ton of energy to the stage and want people to jump up and down and spill beer on themselves, or at the same time go out on the dance floor and two step.”

Rogers is one of many artists that have taken over the college scene in the sub-genre of Country music called Texas Country. Some describe it as “Outlaw Country” but Rogers calls it music for the common man.

“We may not sound like traditional Country music but our songs are for the average man,” he said. “This style of music is an alternative. Most radio these days is geared to pop, teeny-bopper stuff.”

Rolling Stone described the band as a “must see” and USA Today explained his style as “loads of grit, swagger and heart.”

Rogers said the blueprint of success began at the age of 6 when he learned to play piano.

“At Christmas, everyone around the family always asked for musical instruments,” said Rogers. “I always wanted to start a band. For whatever reason, I really wanted to play music. My dad played guitar around the house and he and his buddies would gather around and play guitar and sing and I thought that was the coolest thing ever.”

So at the age of 13, Rogers wrote his first song called “Leave Me Behind,” which he describes as a sad love song.

“I was trying to be all grown up,” he said. “I had a ton of singer/songwriter influences. It was basically anyone my dad had a record of like Michael Martin Murphy, Beatles, ‘Stones, Cream, Willie, Merle and Glen Campbell.”

Those influences paid off in 2002 when Rogers and his band recorded an album in San Marcos, Live at Cheatham Street Warehouse, which was a bar in the college town. They then signed an independent deal and in 2005 released their second recording label titled Rollercoaster that dipped into the Billboard charts.

Co-produced by Radney Foster, that album raised eyebrows on Music Row and the label Mercury Nashville came calling and scooped them up.

In September of 2006, Rogers and his band released their first national record Just a Matter of Time and have since released Randy Rogers Band, which debuted No. 3 on the Billboard Country charts.

“The new record has been out several months and it’s a good representation of our band,” he said. “We didn’t have a lot of outside influences from the label and that’s one thing the Randy Rogers Band is fortunate for — we get to make the records we want to make and a lot of other groups don’t have that opportunity.”

The list of Texas Country artists is long and is growing every day. From Pat Green to Cross Canadian Ragweed, it’s a musical phenomenon but don’t clump Rogers as your average artist.

“We’ve been together for about six years without changes,” he said. “Everything is split up evenly and we are all equal. Just because the drummer isn’t Randy Rogers doesn’t mean he gets less. We are a big family and that alone sets us apart. Every person that comes and sees us play, we want to give them their money’s worth. You know, at the age of 11, I knew I wanted to do this. When God gives you a talent, you make the best of it and I’m still trying to do that.”