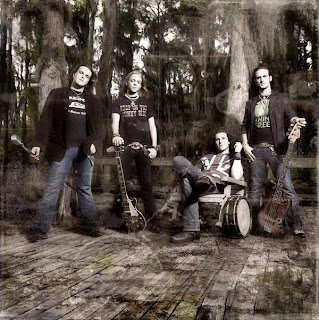 “You can’t judge a book by looking at its cover” is a bit of conventional wisdom that became a hit song in the hands of Bo Diddley a half-century ago. The idea fueled another hit single “Lonely Train” by Black Stone Cherry and proves an apt analogy for this group of four youngsters from Kentucky whose appearance and warm southern attitude with a country twang do not give you the idea that these guys are rock stars.

“Yeah, I like to hunt,” said drummer John Fred Young via cell phone from his hometown of Edmonton, Kentucky. “I’m with my dad now and we are on our way to the pawn shop to go look and buy some guns then head back to the farm.”

His dad, by the way, is one of the founding members of the Kentucky Headhunters, but more on that in a moment. Back to Black Stone Cherry.

“Chris (Robertson, lead vocals) works with his brother’s band,” said Young. “Jon (Lawhon, bass) likes to stay on the mountain on his farm and build stuff and Ben (Wells, lead guitar) loves MySpace. He works on that stuff but don’t let him fool you, he’s a flea market addict. He loves bringing a wad of cash to a flea market.”

Their ages range from 20 to 23 and one would think they are just good old-fashioned country boys. Well, they are, but they are great at what they love to do and that’s play music.

“Chris and I have known each other since kindergarten,” said Young. “We met Ben in 2001. He lived in the next county but we didn’t know who he was until one night we had a jam party at the practice house.”

But that’s not just an average practice house. John Fred’s father, Richard, and his dad’s brother Fred, started the country group the Kentucky Headhunters back in 1968. The multi-platinum band practiced in an old farmhouse belonging to Richard’s dad and that’s where Black Stone Cherry got their start and continue to practice today.

“That’s the center core of what the band is all about,” said John Fred. “It’s an old farm house on my grandparent’s farm and we thank the Kentucky Headhunters for letting us use it.”

John Fred recalls growing up around music and listening to his dad’s band jam. “We have the best relationship in the world,” he said. “My Uncle Fred was the drummer and my dad played rhythm guitar and it helped me decided what I wanted to do. I either wanted to be a veterinarian or a rock star, so I’ve got the middle ground — I’m a musician who’s a country boy.”

After the band formed on June 4, 2001, the group began to practice then recorded an album and started playing local gigs including their middle school gym, which drew over 1,000 fans. And that’s saying a lot since the town has a population of about 1,300.

Compared to Led Zeppelin, Black Crows and Lynyrd Skynrd, it’s not the awesome sounds that attracts most. It’s their songwriting, with lyrics that display the band’s sense of storytelling that has few rivals.

From “Lonely Train,” featured in the popular WWE video game Raw vs. Smackdown that reflects the strain on families whose kids go off to war, to “Rain Wizard,” which is based on a local legend about a mysterious man in BSC’s hometown that could make it rain when the town was in drought. That hometown is dry — without liquor sales — so the song “Backwoods Gold” was written about a man who ran moonshine out of his hardware store.

“That’s one thing that separates us from other bands,” explained John Fred. “Brotherhood. Our families are all great friends and the town we live in, everybody knows everybody and that keeps us level headed. We have younger kids that look up to us and we don’t do drugs and we try to put that positive message out there and not write negative music. That’s very important to us. Our road crew is friends we went to school with so we just keep it very positive — one big happy family.”

Try this on for size — they are even friends with former WWE legend Hillbilly Jim.

“Dad knew him when he used to be a bouncer,” he said. “Daddy told him he was going to be famous for his music and Jim said that one day his muscles were going to make him and sure enough it did. When I was little, I saw a Hillbilly Jim doll at Walmart and me and my dad just laughed. We still talk to him. He still works for the WWE and he has a show called Outlaw Country on satellite radio.”

Don’t let their gentle southern ways fool you. They’ve toured all over the world including Europe where there are thousands of Black Stone Cherry fans.

“We have been over there a few times and we are going back this summer,” said John Fred. “We first played in small clubs with Hinder then it progressed with bands like Sevendust and we just came back from playing with Whitesnake and Def Leppard.” BSC also played festivals with Aerosmith at Hyde Park in front of over 70,000 fans.

“There’s a lot of great bands out there and we’ve made friends with everyone, we never try to make an enemy out of anyone,” said John Fred, “But our lifestyle is different. Whether there’s 10 people or 10,000, we do meet-and-greets after every show. We care for every fan.”