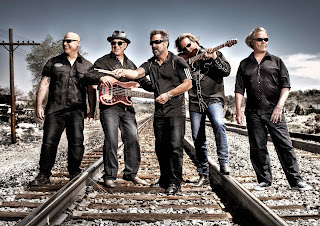 Stu Cook and Doug “Cosmo” Clifford, two of the four original members of CCR, some 15 years later continue to perform the hits “Susie Q,” “Proud Mary,” “Up Around the Bend,” “Looking Out My Backdoor” and “Bad Moon Rising.”

“I don’t know what else I would be doing,” explained 64-year-old Cook, who now lives in Austin. “I have been in this business for over 40 years now and it’s ever-changing. Right now it’s an exciting time to be in this industry because of new technology and new opportunities. The old regime is phasing out and there’s always something new to learn.”

Cook was raised in a musical family. His parents were professional musicians and grew up with instruments laying around the house. “The first one I picked up was the trumpet,” he said. “I then learned the piano and guitar, but I knew I wanted to be a musician when I saw Ray Charles perform.”

As a Christmas present, Cook, then 11, said his parents bought he and his younger brother tickets to see Charles perform live at a community theater. “It was amazing,” he described. “I imagined myself being on stage and having the effect on people like he had on me.”

Just a few years later, Cook met up with Clifford and Tom Fogerty in junior high near El Cerrito, Calif., and the three began playing instrumental music and called themselves The Blue Velvet. “I had no plan to become a musician,” he said. “I was going to become a lawyer after college, but we decided to go full mark on things after messing around for 10 years.”

After teaming up with John during that time, the group decided on the name the Golliwogs, but eventually wanted to get serious and changed to Creedence Clearwater Revival, due in part to Tom’s friend Credence Nuball. After seeing a beer commercial along with an environmental movement, Clearwater was added along with Revival.

Between 1968 and 1970, they released six albums that contained the Creedence songs that remain staples of the classic rock format and have never really left the radio airwaves, including “Proud Mary,” “Born on the Bayou,” “Fortunate Son” and many more.

Tension arose during the early 1970s when John’s brother Tom quit the band several times. Then John took more creative control and imposed new restrictions on his bandmates. With that said, their album “Mardi Gras” was released in 1972 and was received poorly by the fans.

After touring for a few weeks in support of the album, John had enough with his bandmates and Fantasy Records. On Oct. 16, 1972, CCR was no more.

John and Tom did solo projects and Tom later died in 1990 due to contracting AIDS through a blood transfusion. It was also during that time that money issues divided the remaining members of the band, an issue that has since been settled.

The band was inducted to the Rock and Roll Hall of Fame in 1993 but John refused to let Cook and Clifford perform with him.

Staying away from the negative, Cook has great memories. “It was a job well done, satisfaction,” he said. “We gave stuff to our audience and they in return gave stuff back. It was a special feeling.”

In 1994, Cook met up with Clifford and the two jammed their instruments everyday. They decided to keep the CCR hits alive and find some musicians.

Fogerty tried to stop the group in 1997 with a court injunction, which then briefly changed the group’s name to Cosmo’s Factory, but the court ruled in favor of Cook and Clifford and they kept the original Revisited name.

“In early 1995, we were a functioning five-piece band,” said Cook. “We played eight or nine shows, then a 106 a year later and everyone enjoyed it. Now we’ve scaled back to about 75 shows, we continue to celebrate and honor the music of Creedence.”

Their shows became so popular they released a double-live CD titled Recollection, that included new recordings of many Creedence hits. Released in 1997, the album went on to sell over a million copies.

“I want to keep playing with the Revisted project,” he said. “It’s amazing that we are in our 15th year. We are still having a good time and don’t see any reason to stop.”