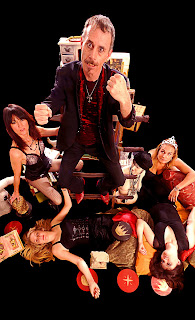 Rolling Stone described it as an “absolute must-see act,” Newsweek says it “freakmania” and FOX News' Tucker Carlson says Jim Rose is a “cult hero.” For the first time ever, The Jim Rose Circus is coming to Southeast Texas and he’s bringing his best show to date, which features former WWE wrestlers Jake “The Snake” Roberts and Kirzarney plus an appearance by his wife Bebe the Circus Queen and Rose’s newly acquired albino Burmese python called Maurice Le Grand that cost a cool $63,000.

The show will bring you brutal comedy as Rose will take you on a journey of his star-crossed life and expose the difference between man and monster. In addition to circus stunts and pretty girls, Rose is bringing former wrestlers who don’t need a ring to settle their disputes.

“The movie The Wrestler was actually based on Jake,” said Rose. “When that came out, his phone started ringing off the hook. He had been screwed over a lot in the wrestling circle so he began to look for someone he could trust and go out on the road with. He looked around the pro wrestling community and couldn’t find it. Jake and I had known each other for years as we met through a mutual friend, who is also a wrestler named Sinn Bohdi who was Kizarney in the WWE. We decided to put together the craziest show ever so here we are.”

Rose explained he has always had a soft spot for Jake. “He was the first villain wrestling fans loved to hate,” he said. “He was set up to go against Hulk Hogan and the fans would cheer him while he went to the ring. All of Hulk’s fans, the Hulkamaniacs, would cheer but there would be plenty of boos and that freaked out the promoter who had invested so much in Hulk and that started a downward spiral for him. Jake did his job and did it good but was screwed over by his charisma and I want Jake the Snake to be the man he is.”

But where did this talented and brilliant man get these wacky ideas?

“When I was a kid I worked at the Arizona State Fairgrounds,” he said. “I started off fetching drinks for a guy named Lobster Boy. From there, I learned some blockhead stuff but it started trending towards daredevil stuff with motorcycles.”

Rose went on to describe how he once had a mishap attempting to jump 27 cows.

“I cleared the cows but must have landed on some spent cud because I landed wobbly and that’s why today I have the posture of a jumbo shrimp,” he said. “I thought I better start doing something with a little less mobility while my back recovered so I did magic show stunts, started building up quite a repertoire and I had a spoken word career going. In that audience was a little French girl that I met named Bebe, who I’ve since married. She came from a circus family in France. Her brother is the director of the Royal Deluxe, the largest circus in Europe. I toured with them once. I learned traditional circus stuff, moved back to the United States and started. My first show sold out and never looked back.”

It wasn’t just his adolescent years that landed Rose where he today. He said he was born premature and cross-eyed.

“I don’t know what was so special about my left eye but my right eye had to look at it,” he laughed. “I was left in an incubator for two weeks before my parents finally brought me home. There weren’t really beds small enough so my crib was shoebox. I don’t know how much I weighed but my mother said I was a women’s size 7.”

Rose of course was picked on because of his eyes but that helped him learn a quick wit.

“One day my dad came home and said he was going to get me corrective surgery. Once that I happened, I ended up getting elected school president in the sixth grade. I love theater then wrote a play. My parents told me if I could write another they would put me in a special arts school. So I wrote another. It was a detective thriller. I need 50 cap guns and all the caps they could find and just put up two rows of desks and shot behind them. Needless to say that was the end of the special arts career.”

Once Rose began putting his first show together, he toured Canada and all of his shows were sold out catching the attention of talk show host Sally Jessie Raphael.

“Back then there were just three networks so everyone watched her show,” he said. “She did an entire hour on me and as soon as that aired, old ladies in walkers were asking for my autograph.”

Old ladies weren’t the only ones watching the show. Musician Perry Farrell, who then was the lead singer of the rock band Jane’s Addiction saw it and wanted Rose to perform on the Lollapalooza Tour during the early 90s. “During my first show, someone pointed out in the crowd Jane’s Addiction. I said, ‘Well I hope she gets treated.’ I was clueless who they were.”

With a background in theater, Rose then went out and bought a Spin magazine and watched 20 minutes of MTV to get acquainted with the rock world.

From there, his popularity soared to new heights. He was featured on an episode of The X-Files and on the front page of the Wall Street Journal, wrote two best selling books, had a reality show called The Jim Rose Twisted Tour on the Travel Channel and even once was in an episode of The Simpson’s where Homer joined Rose’s show as the "Human Cannonball."

“The sideshow was a lost generation,” he stated. “It was gone for about 30 years so I brought it back off of the midway from the ‘step right up’ to a more artistic view. When I started shows I was using belly dancers and it was like the like-minded monsters set up in their crypts and came out to audition.”

Some of his artists included The Amazing Mister Lifto, who hung cinder blocks, steam irons and beer kegs from his body piercing, Matt “The Tube” Crowely, who would swallow seven feet of tubing that was attached to a pump that Rose would use to pump in different liquids, and Bebe, who performed a variety of stunts including the Plastic Bag of Death.

Of all the wild and crazy stunts, Rose said he’s never seen anything like chainsaw football. “That gave a whole new meaning to halfback,” he said. “It was four on four. You crank up the chainsaw, hike it or pass it. I was using chainsaw jugglers and they were real good but it was still mindblowing. No matter how good you are with chainsaws, when you start getting tackled with it, it gets a little hairy. One guy lost a little toe so we decided not to do it. You would be surprised how important that little toe is. It makes all the difference in the world with your balance.”