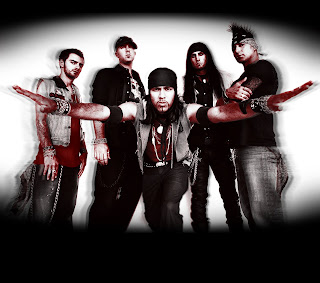 The record companies told Pop Evil lead singer Leigh Kakaty they were looking for something new and different.

“I don’t remember when a lead singer, who is Indian, had a top 20 rock single,” said Kakaty. “If that’s not different, I don’t know what is.”

This four-piece rock band from Michigan has been around since the late 1990s, explained Kakaty, but it’s just recently that they have found national success with hit singles “Somebody Like You” and their current active rock hit, “100 in a 55.”

But they’re doing this without a major record company supporting them. Pop Evil is signed to Pazzo Records and, right now, Kakaty wouldn’t want it any other way.

“It doesn’t matter how many bowties, how many scarves, or tell us how to cut our hair, if it works then it works,” he said. “We have been taking a lot criticism from labels; ‘you don’t look like a lead singer, bass player needs to cut his hair.’ But whatever. There is something here and it’s working.”

But the million-dollar question is — what is Pop Evil?

“We all grew up in Grand Rapids, which was very conservative but we all listened to everything from Led Zeppelin to Tupac,” said Kakaty. “We grew up a product of that pop culture. Being a minority singer myself, it’s hard to find your place when you don’t look like Robert Plant or Tupac so whatever I was, I was above or below that norm. Pop Evil wasn’t about the name. It was about the lifestyle.”

It wasn’t the normal Michigan lifestyle either. The 27-year-old’s father is from India and his mother is Canadian.

He’s not the only one in the band with a distinct heritage.

Pop Evil also consists of Turkish, Mexican and Polish descents. Kakaty explained that the group came together late in the 90s as most were members of competing bands but once all came together, he wanted to do something different.

“I didn’t want to save money on the recording costs,” he said. “There are so many people that can make music these days by going down to the Guitar Center or Best Buy to get an 8-track machine and the next thing you know they are recording in their basement. You don’t meet anyone like that and this industry is based on relationships.”

The lead man then wanted his band to play covers, or songs recorded by other artists.

“Instead of making just 20 bucks a night, why don’t we suck it up, save money, play some covers and find a great producer and really go for it,” he said. “Instead of recording an album, let’s do three songs.”

Being from Michigan, Kakaty enlisted Al Sutton, whose credentials include Kid Rock, another Detroit native. “Our first song was ‘Somebody Like You’ and we then shot a video for that single,” he said. “We then went to our hometown radio station in Grand Rapids (97.9, WGRD) and just hounded them.”

The hounding worked as the single was added to their nighttime rotation in 2006. The song instantly drew rave reviews forcing the program director of WGRD to put the single into fulltime rotation.

After the song went No. 1 at the station, the PD asked for another song in 2007, “100 in a 55,” and that instantly became the local chart-topping hit. indie label Pazzo Records came in and snatched up Pop Evil and the boys hit the studio to record the album, Lipstick On The Mirror. The single “100 in a 55” was re-released and is currently in the active rock charts across radio America and “Somebody Like You” was also recently released to mainstream radio stations.

Pop Evil then left the Michigan area and began touring, supporting bands like Tesla, Puddle of Mudd, Theory of a Deadman and Saliva. Now, they have just started a tour of their own.

“It’s really insane,” explained Kakaty. “Everywhere we go the fans are going nuts. We are on our second single now and that’s crazy because some major record bands don’t have two singles.”

Kakaty added their shows are high energy and well worth the price of admission. “The economy is so bad, especially in Michigan, people don’t have $10 or $20 to waste on something they don’t get,” he said. “You play your instrument for nine hours on stage, you are going to get booed. You have to put on a show. From a national standpoint, Kid Rock and Eminem (another Detroit guy) spend a ton of money on their props, so whether you like them or not, they take you on a journey and that’s what we try to do. We don’t have that kind of money but we really try to do it right.”

Pop Evil has since added their DJ to the tour so there are no recorded tracks behind the music — the entire musical barrage is created right there on stage.