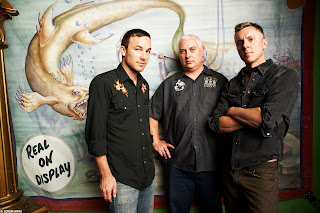 The Toadies are back. They are out from underneath the corporate umbrella and have signed with an independent label and are free to do what they want.

Despite breaking up nearly seven years ago, the boys of Fort Worth have done more than getting back together for a reunion show. They are out from underneath the corporate umbrella and have signed with an independent label and are free to do what they want.

“We are not stuck under that big corporate record label that doesn’t know what to do with us,” said guitarist Clark Vogeler. “They are not stymieing our career as opposed to helping it and that was what was going on in 2000.”

The story began in 1989 when Vaden Todd Lewis and Lisa Umbarger met while working together at a record store in Fort Worth. They both liked the same music, so Todd taught her how to play bass and they started a band called The Toadies together.

After making several demos in his bedroom, the group signed a deal with Interscope Records and released Rubberneck in 1994 that produced the hits “Possum Kingdom,” “Tyler,” “Away,” and “I Come From the Water.” It sold 500,000 copies within a year, gaining gold status and went over the 1 million platinum mark in 1996.

After going through two guitar players, Vogeler joined the band in 1996 and they toured like crazy in support of their successful debut album.

Then trouble began with the record label. After the tour, they went into the studio and recorded Feeler but Interscope canned the album and the band grew frustrated and had to take a break. When they finally returned to the studio, Vogeler said they used some songs from that recording and created their second official major release, Hell Below/Stars Above in early 2001.

They began the tour but Umbarger left the group and the band broke up just five months after their second release.

“I moved to Los Angeles and studied editing,” he said. “I’ve done some TV, documentary and music editing the last couple of years.”

The Burden Brothers released two albums and toured for years and the Toadies reunited March 11, 2006 for a one-night show then played a few more gigs here and there. Vogeler thought they were going to do a few shows but Lewis parted ways with his band and called him and Reznicek in August of 2007.

“He (Todd) started writing songs and said they sounded like the Toadies,” said Vogeler. “He told me and Rez he had these songs and wanted to know if we wanted to do an album. It was good timing.”

The band signed a deal with indie label Kirtland Records and recorded No Deliverance, which was released in August.

“Working with an indie label, they let us do what we want and that’s a great position for us,” said Vogeler. “Todd has found his way. He can sit down and bust out a song in one day. Back then, we had to work through some things but this shows on the new record. This is a straight-ahead, rock-n-roll album. We were focused, it’s simple and we wanted to keep it raw.”

But after seven years, will there be a warm reception waiting for them? Before the new album, you could catch a Toadies’ song on the radio or even play along with “Possum Kingdom” on the video game Guitar Hero II.

Vogeler said the group has been touring and the fans have been nothing short of great. “They (fans) continue to drive us,” he said. “They kind of got us off our asses and back into the studio. We started playing a few Texas shows here and there and we were completely blown away by their enthusiasm they have maintained after we broke up. Our shows have been half the people our age and half of 18 to 25-year-olds that have never seen the band.”

Older and wiser, hopefully the days of breakups are long gone.

“We decided to just record the album, do a tour and just have fun,” said Vogeler. “It’s been a hundred times better than we could have imagined. We have some ideas for next year but beyond that, we want to play good music and have fun and that alone has been working for us, so we are going to stick with that.”