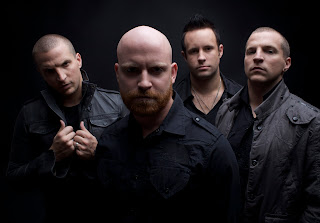 The band Red may not ring a bell to the average music listener. They’re not flashy nor do they use strange gimmicks to garner attention.

The group, who started off in the Christian music scene, has now crossed the proverbial mainstream line and is beginning to get the attention they deserve.

“For our purpose, we just wanted to be honest on who we were,” said guitarist Jasen Rauch. “So the fact that we were Christians, those things we were writing about were coming from that perspective and influence. We didn’t want to be boastful or preachy.”

It started some seven years ago when Rauch met vocalist Michael Barnes and a set of twins — Anthony and Randy Armstrong.

They all set their sites on Nashville — not as country musicians, but for a place to set up shop. Rauch said they all became roommates for a year or so and then the music became natural and not forced. With all that said, they had to settle on a name, which Rauch said was the hardest thing to do.

“Yes, that’s the worst process, ever,” he described. “We really wanted something that represented the music itself. It began with RED, the color of anger, then RED, the color of passion, blood, life and love. RED captures all of that pretty accurately.”

The group had a name, and then came the music, which really wasn’t geared directly towards the Christian genre.

“I was working in a recording studio as an engineer and most of my contacts were in the Christian music industry,” said Rauch. “We (the band) were all Christians and when it came time to write music, we didn’t write music as a platform or pedestal to get a message out. That wasn’t our purpose.”

After showcasing for several major record labels, RED signed with Essential, which is a subsidiary of Sony Music that rosters Christian bands. It was a perfect fit for Essential, said Rauch, and the band did not disappoint.

Their debut album came in 2006 as End of Silence was released and its first single, “Breathe Into Me,” won the “Rock Recorded Song of the Year” in 2007 at the GMA Dove Awards. If that wasn’t enough for the debut single, it climbed to No. 10 on the mainstream rock charts.

Two more singles were promoted over the airwaves and the band began touring with such Christian music acts such as Disciple, but also played with rockers Three Days Grace, Chevelle, Seether and Puddle of Mudd. They earned a Grammy nomination, “Best Rock or Rap Gospel Album,” and their debut album sold nearly 300,000 units. “That was the little record that could,” described Rauch. “It never really spiked, but just sold consistently for two years.”

After 500 live shows and narrowly escaping lifethreatening injuries when their van wrecked, causing then drummer Hayden Lamb to miss the remainder of the tour, RED released their sophomore album, Innocence & Instinct.

The album has been out a mere three weeks and three different singles are on three different charts. According to radio trade magazine Radio and Records, “Never Be the Same” is No. 6 on the Christian/CHR chart, “Fight Inside” is at No. 9 on Christian Rock and “Death of Me” currently sits at No. 22 on the Active Rock charts. “Fight Inside” debuted at No. 1 on the Christian Rock chart, which was a first. Radio and Records stated that RED became the first band in Christian rock history to have a song debut at No. 1.

“We really didn’t have any goals as far as numbers are concerned,” said Rauch of the new album. “It took us 13 months to turn the record because we were touring the entire time, but we couldn’t be more happier now. We are revved up. This is far more than we or the record company could have imagined. We are incredibly honored since we were so into the project.”

Thanks to Rauch, who composes most of the music, the band was able to get plenty of work done on the new record. “I have a full rig we carry with us on the road and it’s really like a full-time studio,” he said. “We have all these flow of ideas and game plans of new songs. They aren’t just my songs, but they are RED songs.”

Some music fans may categorize RED with Christian artists like Michael W. Smith, Newsboys, Carmen and MercyMe, but that’s simply not the case. None of those artists would be asked to tour with the likes of Staind, Sevendust or Papa Roach, and the rock community has put up no resistance.

“We watched how we were carrying ourselves as we were crossing over,” said Rauch. “But the Christian market to mainstream wasn’t any different. We wanted to play the same shows and have the same intensity, regardless who we were playing for or what they believed. We don’t view what we are doing as an opportunity to recruit people.”

Rauch then used Sting as a further example. “You don’t see Sting as a Buddhist artist, even though I am sure his music is influenced some by, and that’s kind of where we are coming from. We are careful not to step on anyone’s toes or judge anyone we are on tour with.”

The adventure continues as RED finds shelter on both the mainstream rock and Christian music charts as their improbable crossover dreams continue.