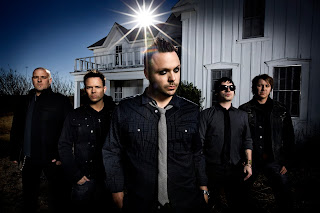 Houston is known for many things, but with the possible exception of Z.Z. Top, it’s hard to find a successful rock band that calls the fourth largest city in the country their home. Four members of Blue October are from the Space City, with bassist Matt Noveskey hailing from Michigan.

“I met the band through a booking agent,” explained Noveskey. “They were going through lineup changes and someone in Ann Arbor asked me to check out this CD and I was completely blown away.”

Noveskey was invited to sit with the band, which was started by brothers Justin (lead singer) and Jeremy Furstenfeld (drummer), for a jam session. “They asked me to join about 30 minutes later,” he said. “I didn’t know anyone in the band and we instantly hit it off. I knew this band had something special so I immediately jumped at the chance to join them.”

As most bands do, Blue October had already self-released a CD — The Answers in 1998 — that saw local success with fans and local rock radio station 94.5 The Buzz.

As described by Noveskey, it was an old school indie project. Then the band hooked up with producer Don Byczynski, better known in the music world as dB, in San Marcos and caught the attention of Universal Records, who later signed them and released Consent to Treatment in 2000.

“That album was the big production, big producer type stuff,” said Noveskey. “We flew out to Los Angeles and it was a great experience. I am super proud of that album. It’s one of my favorites.”

But Universal wasn’t happy with the less-than-rapid success and released the band from their contract — but it wasn’t too long before the same people who said they weren’t good enough wanted them back.

Blue October added guitarist C.B. Hudson to the lineup and self-released another record, History for Sale. The record received major buzz and the two sides agreed to take another stab at it.

“Signing with a record label is like making a commitment,” he said. “We broke up, got back together and asked if we were going to do it right this time. It’s like a relationship.”

The single “Calling You” was featured on the American Wedding movie soundtrack and the song picked up steam across the country. But then, something big happened.

Blue October returned to the studio and released their next project in 2006, Foiled. The album’s first single, “Hate Me,” was an instant hit and the band played on late night shows such as The Tonight Show with Jay Leno, Jimmy Kimmel Live! and Late Night with Conan O’Brien.

“Hate Me” reached No. 2 on the Billboard modern rock charts and helped the album sell over a million copies. “That song was in the right place at the right time,” said Noveskey. “If that would have been on an earlier album, I don’t think it would have had the success it did.”

Noveskey said the song was very relatable because a lot of people didn’t have a voice. “They didn’t have an outlet,” he said. “There was a lot going on in the state of music at that time. There was a ton of processed and manufactured music and it was being written by other people. Labels were putting it in a box and marketing it and people were sick of it.”

He went on to describe that lead singer Justin wrote the song purely from the heart and it wasn’t going to be a single off the album. “It spoke to people,” he said. “That song got us to a point where we thought we should be and things started to happen for us.”

Up next was Blue October’s fifth studio release, Approaching Normal.

The record was released in March and had the pleasure of working with Grammy-winning
producer Steve Lillywhite, who has worked with the likes of U2, Siouxsie & the Banshees, The Rolling Stones, Talking Heads, Phish and Dave Matthews Band.

“One of our managers knew this guy from back in the day and bumped into him and asked him to check us out,” said Noveskey. “It’s not like this guy has to do anything he doesn’t want to do. He only gets involved with a project he cares about and it turned out he really liked us. Every member of the band saw their jaws drop to the floor. We all grew enjoying his work and it was a no-brainer for us.”

The album debuted No. 13 on Billboard’s Hot 100 chart with the singles “Dirt Room” and “Say It” as the first two singles.

“My favorite two tracks are ‘Picking Up Pieces’ and ‘Should Be Loved,’” said Noveskey. “There’s no particular reason but I’m a really happy guy, like the cheery one in the band always cracking jokes. I can’t relate to the songs on a personal level but I get the songs and they affect me. ‘Picking Up Pieces’ is very emotional and I get it. I really love the feel of both songs.”

Blue October seems to become more successful as time passes and the verbiage about the older the berry the sweeter the juice comes to mind. “We’ve been putting out music for 15 years and there is something real about it,” he said. “Most importantly, we are honest. With record labels, you get these people who try to come up with ideas. It’s a big marketing scheme and that’s not what I grew up on. I started out doing music that was right and what felt healthy to me.”

Marketing schemes aren’t the only thing that frustrates Noveskey. He said with the easy availability of computer program and machines and along with reality music shows, it becomes quiet annoying.

“Manufactured process stuff gets under my skin,” he said. “As entertaining as ‘American Idol’ is, it bothers me. It makes me a little musical purist but I grew up on bands writing their songs and touring and playing their music. It wasn’t about putting an artist with a certain demographic. The world of Myspace and Twitter has dampened it. I loved wondering what my favorite band was up to, whether they in the studio writing or just taking a break.
Now, you know their every move.”

Despite his sourness for Myspace, Blue October has accumulated over 41 million plays on the Web site and has more than 300,000 friends. A group that once couldn’t find a gig outside of Houston, the band will travel overseas this fall to play Berlin, Glasgow, Vienna and London.

While it’s safe to say Blue October has yet to match the decades-long winning streak of a certain little old band from Houston, you have to include them in the conservation with Billy and the boys.