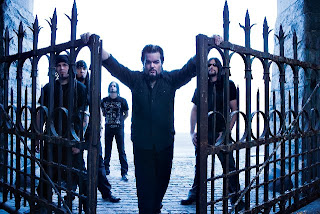 The journey from Sun Studios to Graceland past the blues and barbecue joints on Beale Street reminds you there is no place like Memphis, where Elvis Presley and W.C. Handy still cast large shadows in this land of the musical giants. While the King may have left the auditorium, a quartet of musical princes of the city labor on as Saliva.

The band is touring in support of their fifth album on Island/Def Jam Records, "Cinco Diablo." Drummer Paul Crosby said the album is not the average Saliva record.

"Most aspects of the record are heavier than the previous ones," he noted. "It's more mature, more real. We tried not to polish it as much and stay true to ourselves from the beginning without producing "mojo' on it."

The second single, "How Could You?" is blowing up on the rock radio charts, but the ballad is not your typical Saliva song.

"That was the last song written on the album," said Crosby. "We wrote it with Bob Marlette (Seether, Shinedown). The record was done but we felt like the album needed one more song. We didn't want to be stuck in that same mold. We wanted to get outside the box a little bit and experiment and it seems like everyone is happy with it."

For Saliva, it all came together in 1995 when four friends - all playing in different bands - found themselves without a gig.

"We were all in different bands and ironically we were the better players in each group and each band broke up at the same time," said Crosby.

"Josey (Scott, lead vocalist), Wayne (Swinny, guitars) and Dave (Novotny, bass) were jamming together with another drummer, but I got a call from Josey saying they were going in another direction with a drummer and wanted to know if I wanted to join. It was literarily a perfect opportunity for all of us."

Born was Saliva, but the name didn't come about from the mouth-watering food from their hometown.

"Josey came up with it," explained Crosby. "Of course he didn't invent the word but he wanted to go for a name that was cool and a word parents thought was gross."

Speaking of gross, their national debut Every Six Seconds, produced two mega hits in "Click Click Boom" and "Your Disease," which grossed over two million in sales to make it double-platinum.

Several of those songs were used in video games and by World Wrestling Entertainment for pay-per-view themes and entrance music for a number of WWE superstars.

There was no sophomore slump as Saliva released their second album, Back Into Your System, which was certified gold selling over 500,000 units.

With five studio albums under the belts and despite having to deal with some health issues in recent years, Saliva continues to hold it together some 14 years later.

"We asked ourselves that every day," said Crosby. "When someone counts us out, we reach way down, pull it out and get after it. We are a very fortunate and very lucky band."

They were lucky enough to have record companies fighting over them after one simple phone call. When they were an unsigned band, a local disc jockey in Memphis loved their music and would play a few songs each week. When a record rep from Roadrunner Records called the station, he was put on hold and music was playing and it turned out to be a Saliva song.

"Yeah, that was pretty crazy," said Crosby. "As soon as the record guy got off hold, he wanted to know who the heck sang that song. And really that's how the record buzz started."
Being from Memphis, Saliva has to be Elvis fans, right?

"Well, some of us are and some of us aren't, but we all respect him," said Crosby. "Josey and I are big Elvis fans. Heck, my daughter, Presley Aaron, is named after him."

Hometown musicians like the guys in Saliva know that walking in Memphis means they've got some big shoes to fill. Have you heard the news? There's good rockin' tonight.