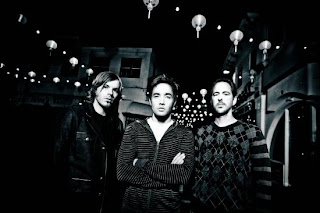 Their first two albums sold well over a million copies to give the band the status of platinum recording artists and their third sold over 500,000 units, certifying them as gold. But after selling lots of albums and non-stop touring around the globe, Hoobastank needed a break.

“We wanted to beat each other up,” laughed lead singer Doug Rabb from the beaches of Maui. “Not because we hated each other but we were together on a bus for so long we were just physically and mentally tired.”

The group, which has seen a few members come and go, has been at it since 1994. From the suburbs of Los Angeles, Hoobastank self-produced their first three albums then caught a break in 2001 when Island Records scooped them up.

The band’s first major release, self-titled Hoobastank, produced hits “Crawling in the Dark,” “Running Away” and “Remember Me.” The single “Losing My Grip” was picked to be on the “Scorpion King” movie soundtrack. Hoobastank later played at the Rock and Roll Hall of Fame.

Then came The Reason. Their second album in 2003 sold over two million thanks to, in large part, the record’s second single, “The Reason.” Rabb said he and the group had no clue what the single was going to do.

“Not only did we not think it would blow up, but none of us thought that song was going to be a single,” he said. “It came out of leftfield.” Being a ballad, the single reached No. 1 across the board in different genres including modern rock, pop and adult rock and appeared on just about every MTV reality show known to mankind. The success of the single earned Hoobastank several Grammy nominations.

But don’t let the ballad fool you, Hoobastank likes to rock.

“That song doesn’t define us,” said Rabb. “If people think it does, then it’s laziness. If that’s the only song they know by us, that’s fine, but that’s not a smart definition of us.”

The band chugged along and released their third album, Every Man for Himself, in 2006 and then it was time to take a break.

“We need time away from the music world,” said Rabb. “We knew just write, record, tour. We were burned. Everything we were writing just didn’t feel right so we weren’t really happy with it. It forced us to take a step back and enjoy the normal life.”

And that they’ve done. The band from the West Coast has recorded a new album, and probably got in a few games of bowling. It’s titled For(N)ever and their first single “My Turn” is currently in the top 10 rock charts.

The new album is set for release in early 2009. As far as the music goes, Rabb claims not much has changed. “We never really sat down to make a conscience effort to change album to album, yet people have come up to us and say this is their favorite record and that they can hear the evolution of us.”

So what’s the deal with the letter ‘N’ in the album title?

“No hidden meaning or anything,” said Rabb. “After going through the songs, I noticed the majority of the songs deal with positive aspects of relationships so I was talking with our manager about forever and never and we comprised with For(N)ever.”

“It’s still exciting,” said Rabb . “Thinking about the good shows we’ve done the last 10 years and to know we can accomplish that helps drive us. Besides having a couple of grays in my beard, our mental state is so different. We have recharged ourselves, which made us hungry again.”

So what’s left for Rabb and his two band mates to accomplish?

“Well, I wouldn’t mind taking a few of those Grammys,” he said. “It would be icing on the cake, but no really, if we can keep playing music and feel good about it, that’s all I could ask for.”