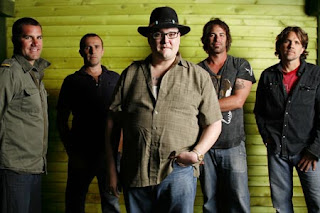 Soon-to-be 39-year-old drummer Brendan Hill met John Popper when he was 13 while both were going to school in New Jersey. Some 25 years later, the duo share the same stage and a great friendship together.

After graduating high school, the two moved to New York and began playing music together, forming a band called The Establishment with Popper, singing, playing guitar and the harmonica and Hill on the drums. After adding guitarist Chan Kinchla and bassist Bobby
Sheehan, they changed their name to Blues Band, which later became Blues Traveler.

“You know, we started more than 20 years ago and it’s become more than just a job,” explained Hill, who was interviewed while chasing his kids through a play gym. “It’s a family, a brotherhood and creative outlet. You are on the road 180 days a year and get paid good money to play for people who appreciate your music. It’s a kick you can’t stop doing.”

Three albums were released before Blues Traveler’s music hit mainstream radio, but their self-titled debut album spawned the single “But Anyway,” which soared on the college radio charts. That 1990 tune featured vocalist Joan Osborne, who the group met when they owned a blues club in New York.

“If there is a musician we like, we bring them in,” explained Hill. “The club was Nightingale’s there in Lower Manhattan and she would come in on Mondays when we had an open jam.”

Their sophomore album, Travelers and Thieves, came in 1991 and featured a jam with Carlos Santana. David Letterman then called Blues Traveler his favorite group and they have since made more appearances on The Late Show with David Letterman than any other artist.

It wasn’t until 1994 with the release of their fourth album, “four,” that the group finally made the big time with the hit songs “Run-Around” and “Hook.” That year, they appeared at Woodstock ’94, toured with the ‘Stones, won a Grammy and earned a spot on Saturday Night Live. To put icing on the cake, the record went platinum – six-times. And it wasn’t a better late than never approach, said Hill.

“To be honest, it was the best thing to happen to us,” he said. “Putting out three albums and touring had given us great experience. It happened at a good, slow pace and, since we started so young, that is what this band needed.”

Over the next two years, the band toured like crazy, then recorded and released Straight On till Morning. That record sold over a million copies in 1997, giving them consecutive platinum albums, but with the good comes the bad.

Popper was involved in a motorcycle accident and was confined to a wheelchair for months. In the summer of ’99, he had emergency heart surgery. Just months later, tragedy struck Blues Traveler when Sheehan died due to an accidental drug overdose.

“It was a very difficult time because he was not only a part of the band but we had all been friends since high school,” said Hill. “We debated for a while to go on but knew Bobby would want us to go on.”

“We’d adapted to bad situations before with John in a wheelchair, his motorcycle crash and Bobby, so the record label wasn’t that big of a deal,” said Hill. “We moved to a smaller label where you can be more creative.”

After a live album, along with a tribute album, the band most recently released North Hollywood Shootout, which features an appearance by Bruce Willis.

“This album is the middle ground between too studio perfect and too studio crazy,” said Hill. “We wrote this album while in the studio and I really like it. We play about four songs off this album live and that’s a good average. It shows you have a strong record.”