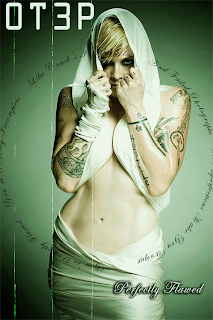 For those who know Otep and her music, this show is just what the doctor ordered as it will be the group’s first trip to Beaumont. For those who don’t, check this story out.

Otep performed just four shows in Los Angeles in early 2001. At the last show, music industry mogul Sharon Osbourne was in the crowd and offered the band a spot on the coveted Ozzfest Tour. Record labels lined up to sign the band and Capital Records became the fortunate ones to gain musical rights.

Otep Shamaya, the singer, describes the group as “uncompromising collective of artistic bohemians with creative catharsis through art and music.” The blonde beauty is a true artist.

“I had the hunger to create things,” she said. “It sort of manifested itself in the beginning in the form of illustrating because I would draw, and draw, and draw. Then I wanted to put stories to the pictures. After that, I got into poetry and poetry performances, then eventually put the poetry to rhythmic music.” Her poetry was so powerful that she was featured on HBO’s Def Poetry.

Just eight years ago, she and a friend went to Ozzfest to watch the popular tour and she got a foul taste in her mouth watching a certain band.

“I don’t know the name of them but they were very crappy,” she said. “They were very disrespectful to the women in the crowd, then the fans started booing them so the band began drenching them with beer. I thought to myself, these guys don’t appreciate this opportunity so I looked at my friend and told him ‘this time next year, I will be playing on this very stage.’ He laughed and said I didn’t even have a band.”

But low and behold, Otep was on that very stage the following year. For those unfamiliar with the band, their shows have received rave reviews.

“People may not appreciate the loud dynamics but they may appreciate the artsy part of the show,” she said. “It’s about an emotional release. We relive the emotion that caused us to write those songs. My goal as an artist is to motivate and inspire, or provoke. If you come to an Otep show, I hope that is what we can give you.”

But Otep is not your average rock star. She’s a very outspoken individual who follows politics more closely than some of the politicians in office, landing her an invitation to speak in Denver at the Ballot Bash during the Democratic National Convention this past August.

“It was incredible,” she said. “Probably one of the most memorable moments of my life and it definitely wasn’t the audience of my demographic. I spoke on behalf of the Rock the Vote campaign and voter registration and why it mattered. Being informed and involved was no longer a necessity, but an act of defiance. It’s important to stay active and pay attention. Some people don’t believe their vote matters because of the electoral college. But, to some there are more important ballot issues on state measures that are by popular vote. After I spoke, everyone there came up to me and thanked me for what I did. It was a remarkable experience.”

Asked how she got so interested in politics, Otep explained that during her childhood, one parent was exceptionally conservative, almost a “McCarthyist” and the other parent was an idealistic Kennedy follower.

“I was bombarded by very extreme points of view,” she said. “My mind got inquisitive so I wanted to find out things and see which view was more fair and in my mind, what JFK said was usually right, which was the more practical matter. I loved the issues and enjoyed reading about it. Then I started listening to Rage Against the Machine, who brought attention to things that were important. Those issues were bigger than what other bands were speaking about.”

She encourages people to vote and you want to know whom she may have voted for president?

“After eight years of the worst administration of modern history, they’ve pillaged our natural resources, misused our military, basically gone away from the conservative plan on which they’ve ran, basically helping out their rich friends. We’ve seen the vice president expand his powers to dangerous levels, the economic crisis. Here we are with a chance to turn our ship in another direction. If the Bush policies aren’t stopped, this country will look even worse. If we care about maintaining our privacy rights, keeping jobs in America, giving healthcare to everyone, then get out and vote.”

If you haven’t figured it out by now, she voted for Barack Obama.

“What I like about Obama is his ability to be cool,” she said. “When Hillary (Clinton) was throwing everything at him in the primaries, he stayed cool and calm. (John) McCain is throwing everything at him while he’s managing a great campaign and continues to roll on. You want someone who is running the country to stay cool and calm and not have this John Wayne shoot’em up diplomacy.”

Her thoughts on the war in Iraq?

“One of the things that keeps driving me insane is Democrats, or whatever you want to call them, have allowed the other side to define what a liberal is. They say we don’t like wars. We just don’t like fighting in stupid wars.”

Don’t be afraid of Otep. You may learn a little something from her.